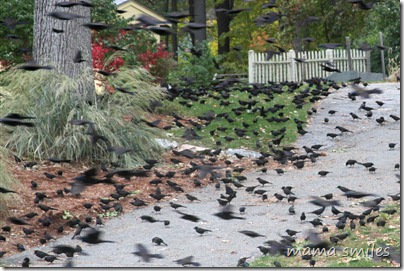 A flock of migrating birds

We made the most of a string of beautiful days in October, and a very fun trip to the Cape (Yarmouth). Mike’s aunt and uncle treated us to a free stay at the lovely stay at the Cove at Yarmouth. The rooms were nice and clean, and best of all there was a kiddie pool for kids aged four and under – perfect for my 1-year-old, 2-year-old, and 4-year-old water babies! Highlights of the trip for the kids were the beach, the ZooQuarium (also a favorite last year) and the Cape Cod Children’s Museum, which is brilliantly laid out in a large warehouse-type building so that multiple children can play with different exhibits and still be seen by a single parent. I was pleased to see that they included dress-up clothes for boys – Johnny played blissfully throughout the museum dressed up as an astronaut fireman, with some knight’s armor added later on! We were able to get into the Children’s Museum for free thanks to our membership to the Acton Discovery Museums!

We picked apples in October, but just barely! We were the only group at the farm that day to be allowed to pick apples off the trees instead of from bushel buckets! I think they felt bad because our original date had been cancelled due to rain. The apples were tiny, but delicious honeycrisp, so no complaints here! My original counters got slightly cleaner due to the introduction of SHELVING in the laundry room closet. I now have somewhere to store my appliances other than the kitchen table! Hooray!!! I made less progress on donating stuff than I would have liked, so that goal is continuing into November. I’m very pleased with my completed hat, but I forgot to bring the materials needed for Emma’s sloper to Cape Cod, so no progress was made there. The trip itself was delightful, and we will greatly miss Mike’s family when the last visitors leave Wednesday night.

One final, unplanned goal was met in October: Emma graduated speech therapy! She worked really hard, and we are all very excited to hear her speaking much more clearly while requiring less effort! She now helps Johnny practice his words. =)

Here are my November goals:

What are your goals for November?

Get your own FREE Linky Tools

9 thoughts on “Month in Review and November Goals”