Today’s post about Transylvania comes from Romanian-born Alina, a stay-at-home feminist who lives in Alabama with her three unschooled children and city slicker husband.

THE DAY THE SHEEP COME HOME IN TRANSYLVANIA

Last year, my husband took a few weeks off work and we took a trip to the land of my birth, Romania. Max, Micah, and Milla were able to witness a unique festival known as “Ravasitul Oilor” in the small Transylvanian town of Bran.

Max and Micah gather apples in our  Bran neighbor’s orchard as Milla, 1,  looks on.

My mother grew up in Bran, and I was lucky enough to spend several summers there as a child. Imagine mountains filled with wildflowers and cars competing with horses-and-carts for the roads. Imagine a country where most mothers nurse their babies, and no one has to hide while feeding. Imagine a place where haystacks have little hiding holes  inside them. My kids loved the “shape” of Romanian haystacks, which are so different from the ones we see in our home state of Alabama. 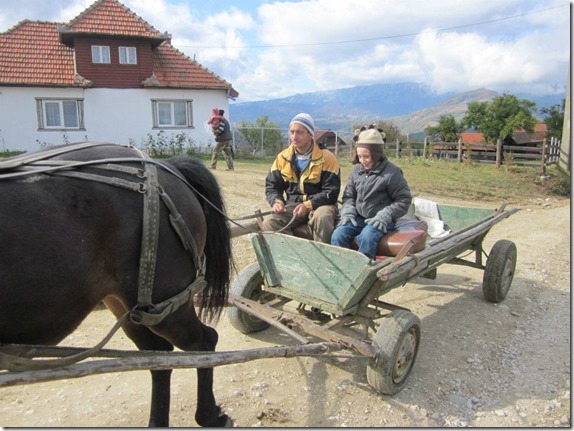 Here’s Max riding in a cart down the road in Bran, thanks to some kind villagers who had mercy on a tired boy.

Between September 30th and October 1st, depending on the weather every year, the Transylvanian shepherds make their annual autumn descent from the mountains with thousands of sheep. The rules of pastoral life are tough: women are not allowed to live close to the sheep because old superstitions have it that their presence could damage the fertility of the sheep or the taste of the cheese. The shepherd is not allowed to leave the sheep to seek the company of other people in the villages. So, all summer long, the shepherd’s best friends are the whistling and his dogs. 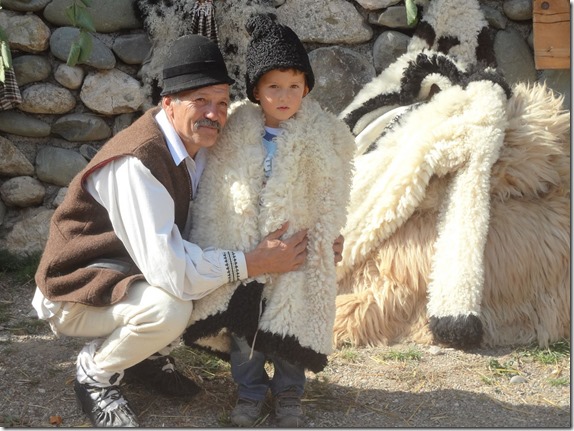 A shepherd poses with a young villager.

“Ravasitul Oilor” is the moment when the warm weather of the year is finished. The shepherds are coming down to the villages with the sheep to spend the cold winter in the comforts of town. Each owner gets back their sheep as well as specific amounts of cheese and milk produced by the shepherds from their sheep. The animals are taken to the winter shelter.

The shepherds – and sheep – are now allowed to celebrate. And what a party it is! The shepherd in the photo was posing with a young village boy from Bran. Notice all the sheepskins around them? They are used to keep warm during the snowy, freezing Transylvanian winters. 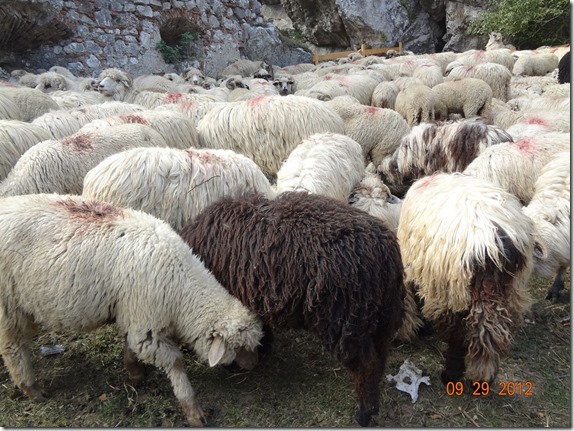 The sheep are returned to their owners based on certain markings. Awards are given for the fattest sheep and the best sheepskin rugs. Local foods and drinks are served and enjoyed. Various cattle and sheep are shown and sold to locals seeking to add to their stock.

One of the highest honors awarded to a Romanian dog is also given out- that of best sheep-herding dog. Peasants have been known to breed their dogs with wolves in an effort to produce the ideal sheep dog. In fact, the Carpathian Shepherd Dog is an actual breed of large sheep dogs that originated in Transylvania. Carpathian Shepherd Dogs have been known to take on the black bears which roam the forests to protect their sheep. They are beautiful and majestic, like their job. 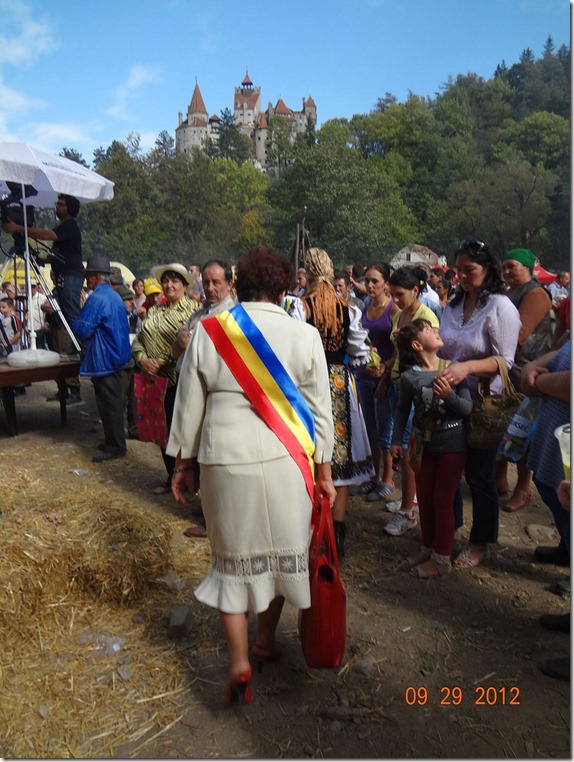 The party in the small village of Bran.

Can you see that castle in the background? That is the Bran Castle, the former home of Count Vlad Tepes, whom you probably know better as Dracula. Local villagers insist that Count Tepes earned his bloodthirsty reputation by being a cruel and harsh ruler, though most view him as a hero for defending this part of Romania from foreign conquests. 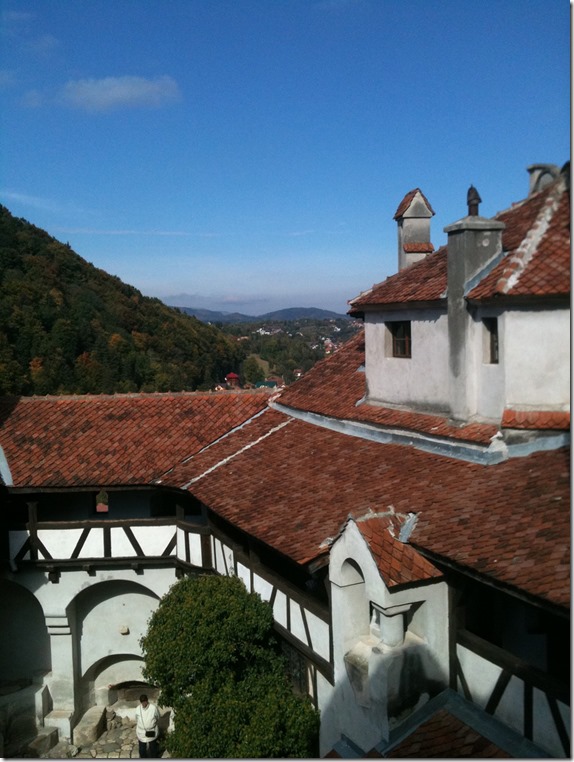 The view from Dracula’s castle to the town of Bran below.

When I was twelve, my cousin and I snuck in after hours and spent the night on those cold, stone floors, hoping to solve the mystery of its being haunted once and for all. We did not solve the mystery, though it was quite an adventure.

The special attention given to the sheep and their shepherds is not just ornamental. In fact, much of the Transylvanian diet revolves around the milk of these mountain-grazing sheep. During most of the year, the shepherds live up in the Carpathian mountains in home-made shacks called stana. In the back of these huts, The inside walls of the stana are more exciting than you might expect because they are plastered with pictures from magazines and newspapers as insulation. In the back of the stina sit countless pounds of cheese wrapped in huge bales, while smaller portions come packed in portable tubes of fragrant pine bark. 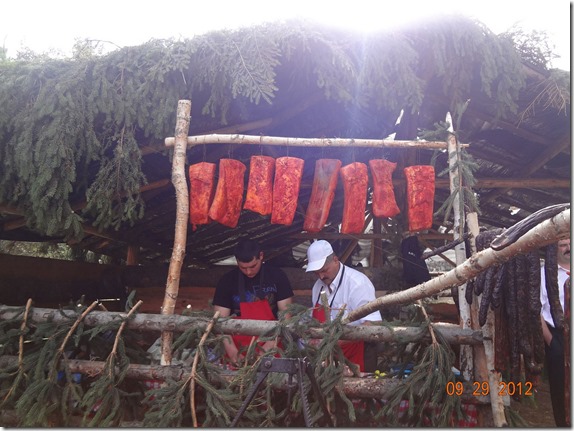 Meat for sale at the festival. Do you like the freshly-built huts made from nearby trees? Transylvanians have to be very handy and know their local plants and trees very well.

In Romanian, cheese is called brinza. The shepherds live on the milk, butter, salty, crumbly brinza cheese and a soft, rich feta-like variety called telemea – and sell what they don’t eat in nearby markets. 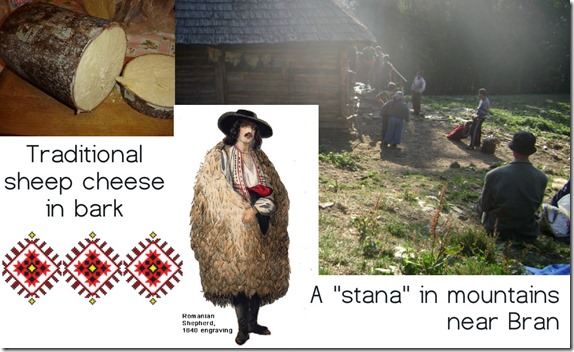 Brinza has its perfect companion in mamaliga – a polenta that may be a legacy of Roman occupation- and a spoonful of smintana, or sour cream. 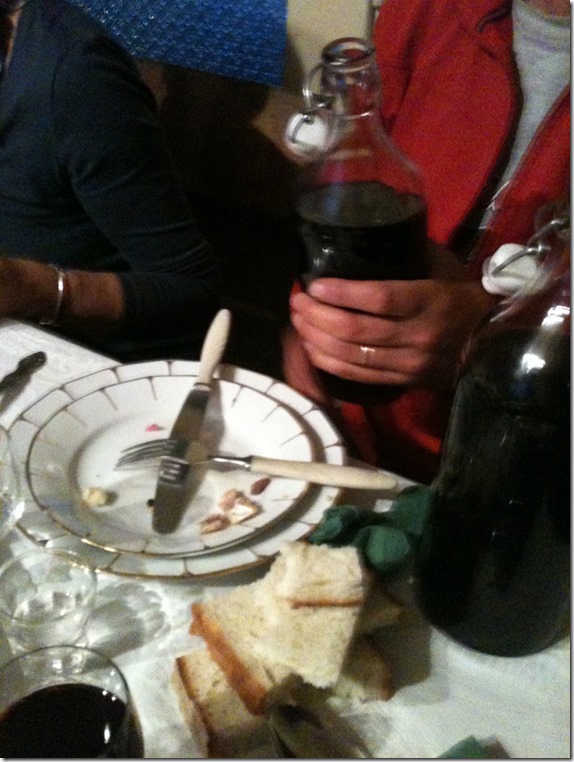 In the cool, old-growth forests around Bran, people collect wild mushrooms and baskets of berries. This is called “foraging”, and you may know some wise Americans who practice this ancient art of wild food-gathering. The local elderflowers are soaked to make a refreshing drink called socata, and elderberries are made into a dark, rich jam. We enjoyed socata with our dinners shared with family and old friends in Bran. 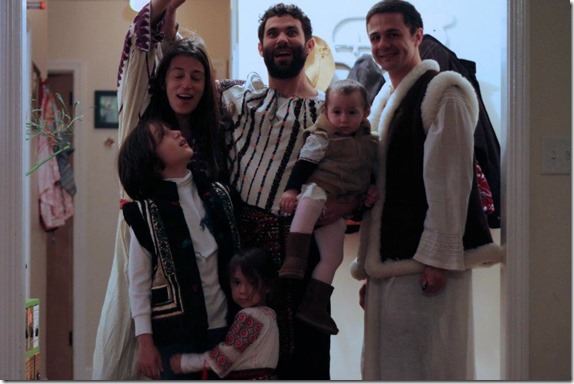 The festivities did not end upon our return to the United States. A few days later, we put on our traditional Transylvanian costumes purchased in Romania and dressed as Transylvanians for Halloween.

We learned so much about Transylvanians and their traditions at the sheep festival. Do you have any festivals in your town that would teach visitors a lot about your way of life?

Shepherd stana in the Carpathians (video)

Thank you, Alina for this tour of Bran! What a great festival to attend! I especially like the cheese stored in bark, and the freshly-built huts are incredible!