Today we are visiting Freiburg, Germany with Emily Gambone, who spent her childhood going back and forth between Germany and the United States. She now lives with her husband, four kids, sweet pit bull and three cats in the US, in a city, but by the woods and the river. She spends her days learning with her little ones, rescuing animals, walking in the woods, never managing to finish her to do list and writing stories about it all, when she gets a chance, at One Fainting Robin. Visit Emily’s blog and read these three posts: A Beginning, Tourists, and Someone else’s extraordinary.

Freiburg is a beautiful city on the edge of the Black Forest in Germany, just a half an hour from the French border. I spent two years of my childhood in this wonderful city, and so I was particularly happy to get to explore it with my own children a couple of years ago.

We had just spent a week in Berlin, so we took an overnight train to Freiburg. The kids loved sleeping in their own little beds — the beds were platforms attached to the walls, three on each side of the train compartment. We got on the train late at night, and it was hard to go to sleep when it was much more exciting to peek out from behind the curtains and see the lights of Berlin disappearing. Finally, everyone went to sleep as the train rumbled through Germany. When we woke up in the morning, we were arriving in Freiburg. 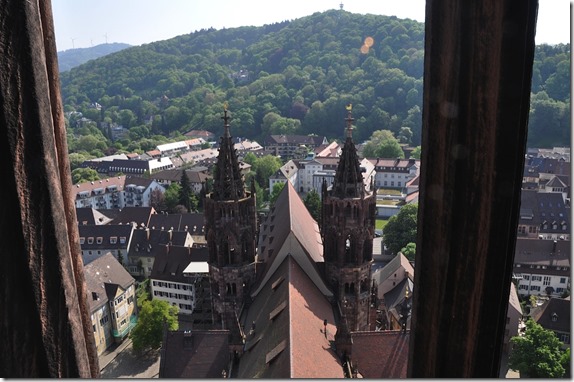 Freiburg has a beautiful old cathedral in the center of its marketplace called the Freiburger Műnster. It was built from 1200-1330, and is considered one of the most beautiful spires in the world. Little gargoyles and other faces are carved out of stone all around the base of the spire. The kids thought some of them were a little creepy. The stained glass windows inside are particularly beautiful, and among religious scenes, they also depict the symbols of the guilds that donated them, including a pretzel for the bakers! 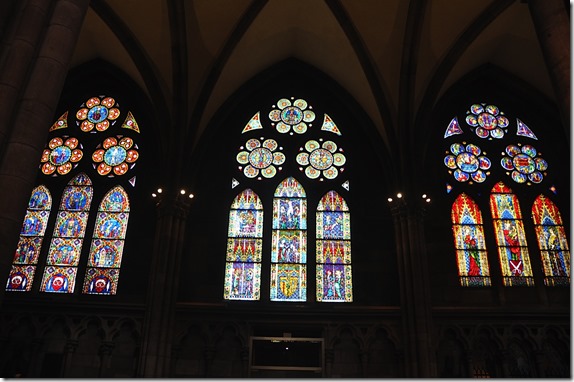 Inside the cathedral, we climbed the 331 very narrow winding stone steps that go up and up and up to the tower in a narrow spiral. The stone steps radiated a refreshing coolness as we climbed higher and higher. We saw the enormous cathedral bells and could look out over Freiburg and the marketplace below. 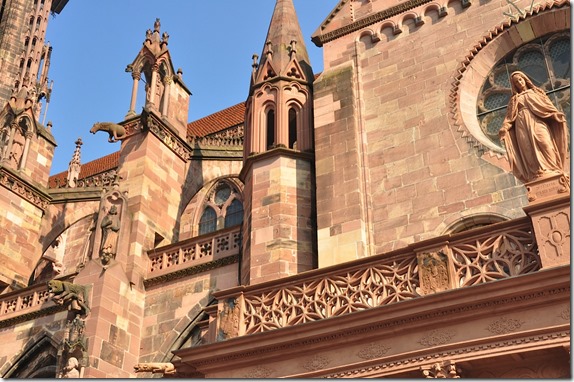 Freiburg has a wonderful outdoor market around the base of the cathedral with huge stands of brilliantly-colored flowers, wooden toys, pottery, fresh fruits and vegetables and the stand that was always my mother’s favorite — a cart devoted entirely to all different kinds of olives. 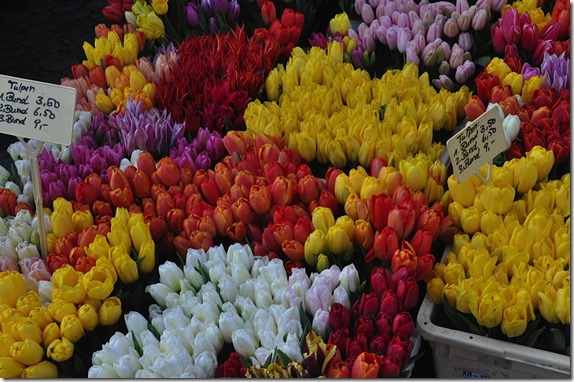 We were visiting Germany in the spring, during asparagus and strawberry season. While the locavore, seasonal eating movement is growing in the United States, it’s been around in Germany for a long time. All the restaurants in Berlin and Freiburg had signs out, celebrating the arrival of asparagus, and listing some of the many ways it is prepared during the brief time it is available, and it was great to see how even in cities, there was such awareness about seasonal eating. 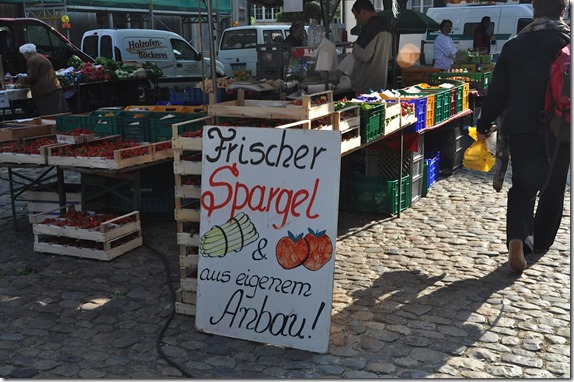 All along the edges of the cobblestone marketplace and surrounding streets, little streams of water flow through tiny canals fed by the Dreisam River. These canals were originally in the center of the streets as a water source that was also important for fighting fires. They are mentioned as early as the 13th century, though they were moved from the center of the streets to the outer edges in 1852 to make the streets more passable. Today, this part of downtown remains largely pedestrian with only some bike traffic and an occasional car. 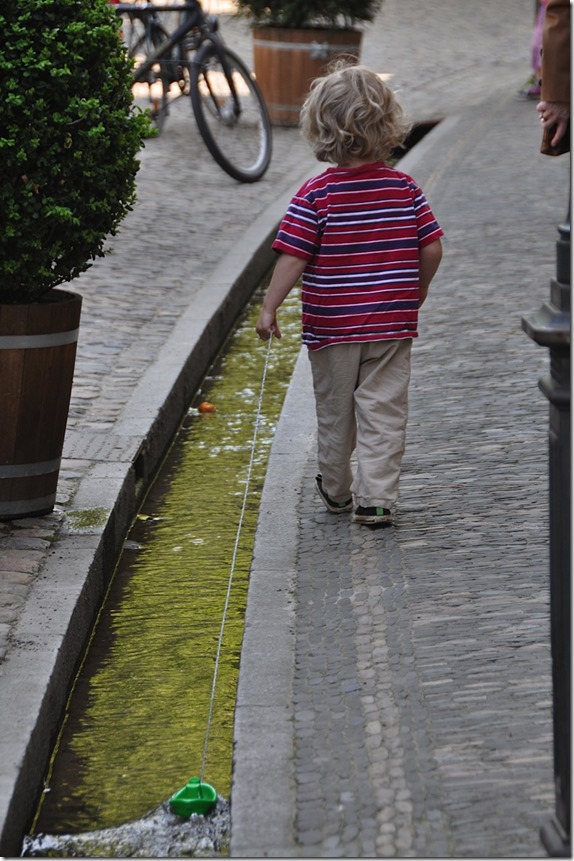 Children love to wade through the Freiburger Bächle as they are called in German. They are great for pulling little boats on strings, or cooling feet on a warm day, and they say, if you step into one of the Bächle, you will marry someone from Freiburg. 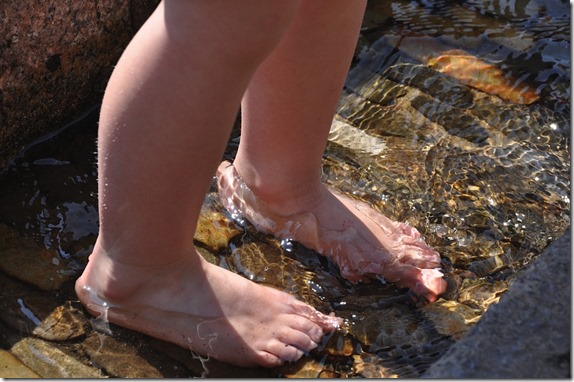 A popular children’s book, Bernhard im Freiburger Bächle tells the story of a little fish belonging to a woman who sells flowers at the market. One day, Bernhard leaps out of his fish bowl and into the little streams, traveling all around downtown Freiburg, people watching and visiting many famous sights. He is lonely in his travels until one day, the fish who has replaced him in his fish bowl at the market leaps to freedom as well, and they live happily ever after together in the Freiburger Bächle.

There is a hillside on the outskirts of Freiburg, and you can take a little funicular train car up the side of the hill to eat at a restaurant overlooking Freiburg. The restaurant was, of course, serving all sorts of asparagus dishes. People can also take a cable car up a small mountain overlooking Freiburg called Schauinsland, which literally translated means “Look into the land.” 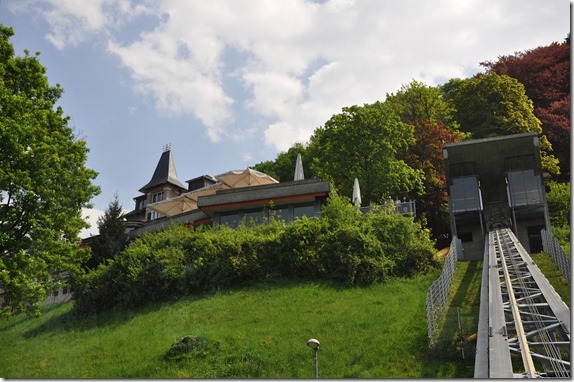 Other neat things about Freiburg we loved included the yellow streetcars everyone uses to get around, being able to go to France for dinner because it’s so close, the beautiful old botanical gardens and cool playground with a water pump and lots of wooden climbing structures, the bakeries and book stores and toy stores around every corner, the stone crocodile in the canal, and the beautiful, sweet-smelling lilac bushes everywhere. 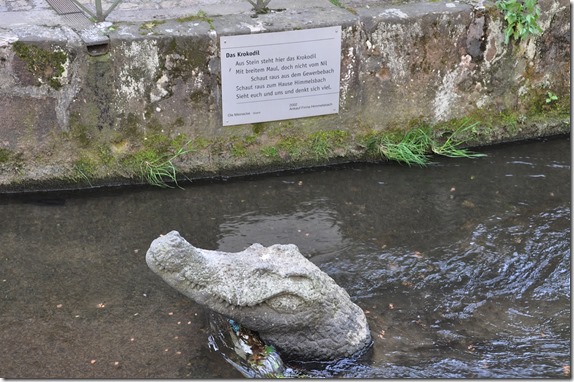 On our last afternoon in Freiburg, as we stood gazing down over the city amid all the beauty and history and our memories, new and old, we saw something none of us had ever seen. In the rooftops, where attics and shingles should have been, we saw patios instead, with tables and chairs and plants and people eating and enjoying the sunshine. As well as I thought I’d known Freiburg, here it was surprising me again, and making me wish our visit was just a little longer, to see what else we might discover. 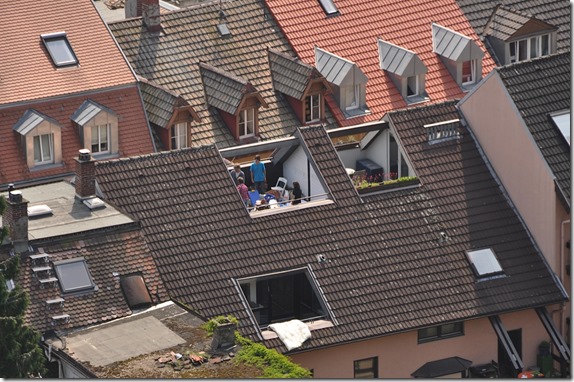 Thank you, Emily, for this wonderful tour of beautiful Freiburg!