Today’s world culture for kids post about Ensenada, Mexico comes to us from Maribel Reyes at Stroller Adventures.

Just 75 miles South of the United States and Mexico border you will find a little town that has grown into a big city called Ensenada. Through the years it has multiplied its population and grown its port to host cruise ships as well as container ships transporting goods across the Ocean.

Ensenada has the best of both worlds; it is geographically blessed with the Pacific Ocean to the West and beautiful majestic mountains to the East. The rain season is usually during the winter months of November – February, which leaves fields of yellow flowers that can be seen from afar.

As you arrive you see the Ensenada port to your left with its large cranes that are moving freight containers in and out of ships. When brought down from the ship they either stay in Ensenada to be turned into finished goods or continue their journey through Mexico or even into the United States. This has helped and still continues to boost the economy. Large manufacturing companies established in Ensenada are: Fender, IR Schlage Lock, ALCOA, CEMEX {Mexican Cements Co.} to name a few.

A little history of Ensenada: from 1882 to 1915 it was the State Capital to Baja California. Full name is Ensenada de Todos Santos; however, it is mostly known as Ensenada which means cove in Spanish. Back in the 30s it was popular among celebrities for the now historic landmark El Riviera which was a beachside casino/resort that hosted big Hollywood names, such as Lucille Ball and Desi Arnaz, Mirna Loy, William Hearst, and Al Capone was also one to visit regularly.

Ensenada is home to 1979 Miss Universe Maritza Sayalero and her tennis playing husband Raul Ramirez. It has also hosted famous guests, including Pamela Anderson, Sandra Bullock and U2’s Bono. It is a quaint City that is always welcoming with open arms. People from Ensenada, or as they call themselves “Ensenadenses”, are friendly and warm. Their native language is Spanish; however, don’t be surprised that they are fluent in English. It is very common to be bilingual and even trilingual as nearby in Valle de Guadalupe {Baja Wine Country} many French and Russians reside. 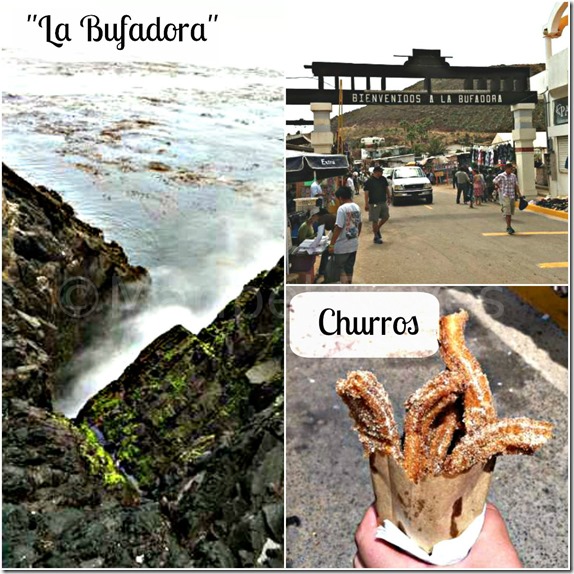 A short drive from downtown towards the South is the famous “Bufadora”. The Bufadora blowhole is located in the Punta Banda Peninsula and is one of the largest blowholes in North America, shooting up more than 100ft above sea level. It is beautiful and always fun to enjoy. There you can enjoy some freshly made “churros”, which are delicious fried-dough pastries sprinkled with sugar and cinnamon.

Wondering where the Fish Taco came from? It started in Ensenada, and you will find many Fish Taco stands. Our family’s favorite is in the downtown area, and it is called Tacos El Fenix. Tacos El Fenix was actually featured in one of Andrew Zimmerman’s and Anthony Bourdain’s shows. The fish is dipped in beer batter and deep fried, then placed on a warm corn tortilla with a special cream and you top it with some shredded cabbage, pico de gallo salsa, lime juice and hot sauce! It is quite tasty and popular with my kids.

You may be asking how I know all this; it is quite simple! I grew up in Ensenada and married an “Ensenadense”.

Maribel Reyes, is a Cubxican {half Cuban-half Mexican} SAHM of 2 very active and curious kids -a boy {3} and a girl {7}. In 2005 she left Corporate America and life in the fast lane to enjoy her family to the fullest. Born in Los Angeles and raised between Ensenada Baja Mexico and Los Angeles she is fascinated by other cultures, traditions and languages, which is why she majored in International Business. Since 2010 she has been sharing her adventures in life on her personal blog Stroller Adventures where she shares her family recipes, her life as a mother, her experiences while traveling and local attractions from California to Baja that she and her family visit. Most recently she has been sharing her journey to lose weight and become healthier. She has lived in both Southern and Northern California. Currently she is preparing her family for their biggest adventure yet: to relocate to Costa Rica.