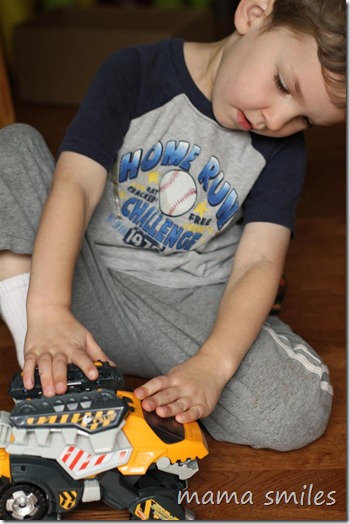 Johnny guards his “boy” identity fiercely in this family of nearly-all girls, and when I was offered a couple VTech Switch & Go Dinos to review, I knew that he would be absolutely thrilled! My four-year-old boy adores the idea of being tough, but violence frightens him. It’s extremely hard to find toys that feel “tough” but aren’t violent, but these dinosaurs that transform into cars and trucks fit the mold perfectly! These dinosaurs seem very durable and well-made, and they allow for a nice range of play. We like them so much that we even bought T-Don the Pteranodon to give to a friend for their birthday! 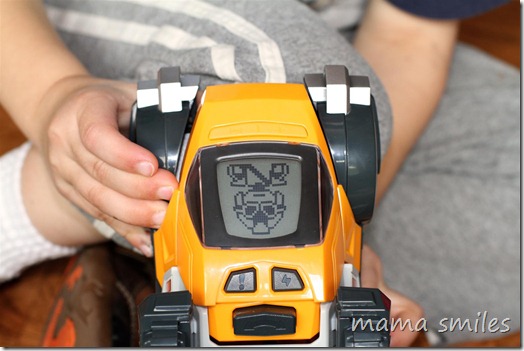 This construction-yellow dinosaur is Attila the Ankylosaurus. The screen changes depending on which mode the dinosaur/truck is in. In the photo above, you see a driver because Johnny has switched the dinosaur into vehicle mode (the switch happens automatically as you move certain parts of the toy into place). The switch is pretty straightforward, except it took us a while that you have to remove the towing hook in order to attach the wrecking ball. My kids also don’t typically play with the toy in either mode – they like the toys somewhere in between vehicle and dinosaur. 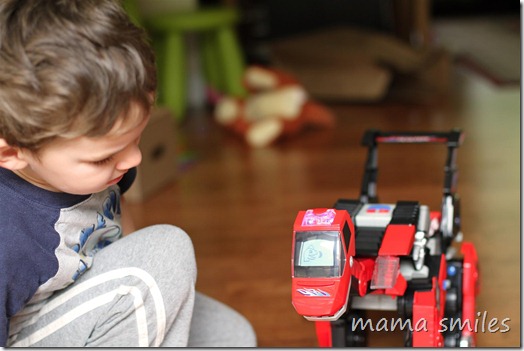 The screen is also used to adjust the volume, as you can see in the above photo of Brok the Brachiosaurus. I love toys that have adjustable volume settings! They also have a power switch, which is a must for any electronic toy, in my opinion. Sometimes my kids turn the power off to play with the dinosaurs using their own voices instead of the pre-recorded ones.

I’m focusing on Johnny’s reaction to the toy in this review because it’s so rare to find a “boy” toy that I really like, but my girls like these dinosaurs as well! Here you can see both Johnny (4.5) and Lily (3) interacting with the dinosaurs. 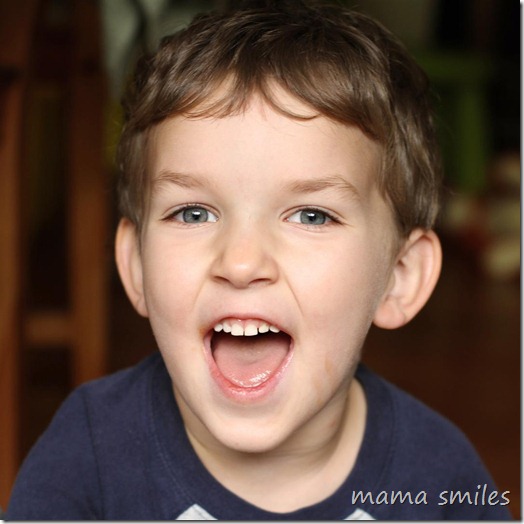 I was so thrilled to find a “boy” toy that both my son and I approve of!

Do you have kids who would enjoy this toy? VTech is running a very cool contest where they could win one! All they need to do is upload a 30-second video by October 1st featuring their very own Dino creation. You don’t need to own a VTech Switch & Go Dino to enter, your child can draw or build one! Visit the official VTech facebook page for all the details!

I participated in a campaign on behalf of Mom Central Consulting for VTech. I received VTech Switch & Go Dinos product samples to facilitate my review.”