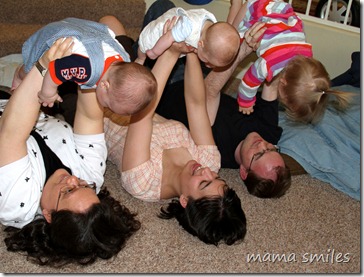 Lily “flies”, along with her two youngest cousins.

We just got back from a two-week visit to Mike’s family in Las Vegas, with a short detour by minivan (thanks to my MIL for loaning us hers!) to Mesa, Arizona for my brother B’s wedding.

As I mentioned in the LONG subject for this post, we took red-eye flights there and back, something I have mixed feelings about. The kids slept both directions. Mike and I didn’t, which is a problem! Leaving in the evening also meant the kids had time to stress about leaving all day long. It may still be worth avoiding Johnny’s epic in-flight meltdowns! The later departure date DID make it easier to get laundry and cleaning done before we left!

I really like flying Jet Blue – they give out free snacks, have changing tables in ALL their bathrooms, offer a LOT more legroom than most airlines, and let you check your first bag for free. This was especially good since my mom and sister gave me a bunch of old clothes to cut up and make stuff out of (so be prepared for more sewing in the near future)! Best of all, they had a great price on direct flights from Boston to Vegas. They were also very nice to our family, and welcomed our kids. I was struggling to carry get Johnny and Lily off the plane Wednesday morning, and a flight attendant carried our carry-on off the plane for us – greatly appreciated! Johnny and Emma still prefer Delta because that airline gave them little plastic wings and business cards, but as a parent I found Jet Blue much friendlier. Maybe I’ll have to make up fake Jet Blue business cards and wings, or something! It was also nice to see that Boston commuters are much tolerant of children at the end of March than they were when we flew to Utah in December.

Somewhere, a couple years ago, I heard about Water WOW! Doodle Books. I searched for them EVERYWHERE (I couldn’t remember what they were called, which made the finding especially challenging), and finally came across them while browsing the sales at our local (soon to shut down) Borders. They were a little pricy, but cheaper than Amazon when I compared prices at home. And worth their weight in gold! All three kids were happily occupied with these during takeoff, in the car, and at several other times during the trip. Since the pens are filled with water, there is no mess, and the pages dry and can be used over and over.

We had a really nice visit with Mike’s family. The kids got to know their relatives a little better, we caught up with family, and Mike and I got TWO dates!
It wasn’t all rosy and fun. Lily was terrified of their dogs for half the visit, and Johnny got a miserable stomach bug right before we left for the Arizona segment. The poor kid threw up seven times in 12 hours, but thankfully recovered barely enough to make the drive. At the time we thought it was food poisoning, but given that Emma has had similar (albeit longer-lasting) symptoms since Monday, it was probably a virus. Hopefully nobody else gets sick!

The drive to Arizona went pretty well, apart from Emma’s cactus rant (you’ll see what I mean tomorrow). My family graciously let us have the master bedroom suite in the 3000 square foot house that all 23 of us who made it to the wedding (all ten children, my parents, and most spouses and grandchildren) were sharing. That made it really easy to get the kids to bed, and we got a decent amount of sleep! It was a lot of people for the size of house, and all of my brothers were left to sleep on the living room floor. I love that my family enjoys hanging out together, even if we aren’t able to get together very often. Mike and I are still hoping to get more siblings out to the Boston area. We love their company, and so do our kids!!!

M&B’s wedding was beautiful, and Emma and Lily LOVED their flower girl dresses – as did their cousins E & R. The weather was unseasonably cold for the wedding’s outdoor reception, which was too bad – especially since that was the day a Boston friend wrote to tell me it was finally WARM out there! We especially appreciated the opportunity to get to know some of my new sister-in-law M’s friends and family. M and B live in the Boston area, so we already knew M pretty well – and owe them several hours of babysitting whenever they have kids! M is absolutely fantastic – Johnny loved her so much the first time he met her (long before they were even engaged) that he stood on his chair throughout dinner (at our house) pointing at her and shouting, “Girl! Girl! Girl! Girl! Girl!” I am SO glad that didn’t scare her away! =)

The drive back to Vegas was a little rougher than the drive out – the kids were well tired of traveling at that point – but there were still no major meltdowns. Emma did throw up two hours out of Vegas Monday afternoon. Luckily Emma was really good about clean-up, Johnny sat patiently in his seat, and Lily was asleep. We were hoping it was carsickness, but I guess it was Johnny’s same bug, because she threw up seven or eight more times during the next 24 hours. At least her stomach settled for the flight home – it hasn’t behaved since arriving at our house, so hopefully she’ll be completely well soon.

All three kids slept for the entire flight home! Miraculously, we got one of the only empty seats on the airplane for Lily to sit on, which I really appreciated – she is pretty big to sit on my lap, but the trip was expensive enough without buying her a ticket! Mike and I got no sleep – definitely a drawback of red-eye flights!

And now we’re home, jetlagged and with suitcases to unpack, but with a wonderful sense of renewal from our time together with family AND away from household chores! Traveling with kids is exhausting, but I feel it’s worth it – especially when it is the only way to see family!