Skip to content
Home » Family » Traveling with little ones: Flying with Kids
27 shares 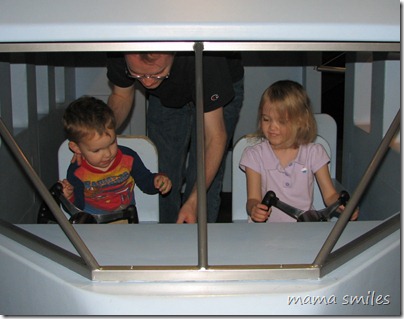 It’s a good thing that the lady who said people with young children should drive, not fly wasn’t on our flights to or from Vegas. Everything started off beautifully. We breezed through check-in and security (well, Johnny screamed as he did on the way to Vienna because he thought the TSA people were going to steal his shoes, but he calmed down quickly) and had a leisurely lunch near our gate. The first few hours of the flight were fine, too. The kids colored and played with stickers, and then watched an episode of Busytown Mysteries that we had on our netbook thanks to this review. There was some turbulence, but all three kids were coping well. I thought I had this flying with kids thing down.

Then things went downhill. Our flight had taken off at 6pm, so by 9pm all three kids were exhausted, particularly Johnny who had woken up earlier than usual and hadn’t napped. He cried for nearly two hours solid, until the flight attendant suggested that I ignore the fasten seatbelt light and go stand with him at the back of the plane. I followed her advice and he was asleep within five minutes, much to my relief. Emma and Lily had already fallen asleep, so the final hour was peaceful.

Check-in on the way back was a nightmare. We got stuck in one non-moving line, and were then told to move to another line that was moving – until we got in it. It took us over an hour to drop off our two bags. There was no line at security, and we went straight to our gate – arriving just as they were boarding. The flight went well until we started to land. Johnny went into a panic attack and had half the plane concerned about his well-being. He didn’t calm down until after we had landed and strapped him to Mike’s back in our ergo carrier.

Things I want to figure out:

Have you flown with little ones? What are your tips and tricks? Any advice for our next trip (whenever that may be)?

15 thoughts on “Traveling with little ones: Flying with Kids”