Skip to content
Home » Education » Too cold to go out? Bring winter in!
99 shares

I’ve been feeling frustrated by this winter’s constantly-well-below-freezing temperatures that have made it hard to have a 1-year-old and a 2-year-old outside for more than a couple minutes.

Yesterday I was tired (having been up with Johnny from 1:30-2am and mysteriously stayed awake ever since) and the kids were grumpy and feeling cabin-feverish. It was 11 degrees Fahrenheit outside, so not great weather for going out. Both kids were mildly sick, so I thought it would be cruel to fellow mothers to take them to the children’s museum (where they would have a blast, but would also infect everyone else). I decided to do what I’d seen done on a few other blogs (can’t remember which ones, feel free to comment if you’ve blogged about this) and bring the snow in to them.

I put a towel on the floor, loaded two IKEA food trays with snow, and gave each kid some play silverware to play in it with. 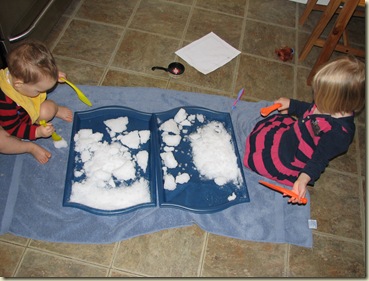 I wish I had a picture of Johnny’s face when I first brought the snow in – he thought it was the coolest thing ever! 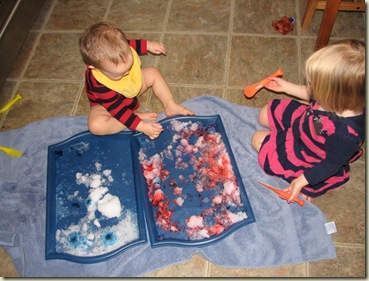 We added some food coloring after a while, and Emma now knows that if you mix red and blue you get purple!

The snow lasted a long time, especially considering that our house is heated through our floors so the floors are always the warmest part of the house.

This kept the kids occupied for nearly an hour, cleanup was minimal (thanks to the trays and the towel), and they played with snow for a long time again this morning.

This is an activity with a lot of learning potential too – yesterday we talked about how the snow was cold and how it melted because the house was warm. Emma got to watch the food coloring disperse throughout the snow from initially being just a few drops of color, she saw how the color got lighter as it spread through more and more snow, and she learned a little bit about color mixing. Johnny learned about the texture of snow without crying because he was cold, and he learned what snow tastes like too (not something I was trying to teach him, but somewhat inevitable considering he’s 13 months old. At least recent research says dirt is good for kids…

7 thoughts on “Too cold to go out? Bring winter in!”