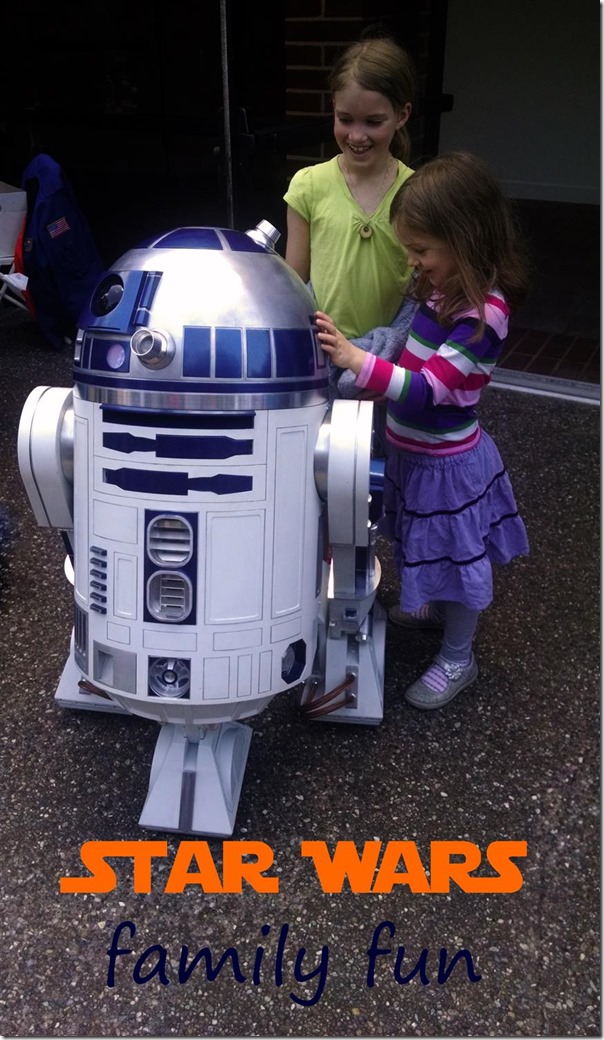 Celebrating May the 4th Be With You Day as a Family

Happy May the 4th Be With You Day! I’m not sure when Star Wars fans first discovered this play on words, but it has become quite the Star Wars holiday over the years. This year Mike and Johnny put together a cute Star Wars themed stop motion animation short to celebrate! Mike is also continuing his Star Wars bedtime stories for kids series by giving a few ways you can rewrite classic children’s picture books to turn them into Star Wars stories.

We had a lot of fun making this movie featuring Chewbacca, Darth Vader, and a light saber wielding pom pom mouse (made by Emma), although I never really caught on to the plot – and I’m not sure Johnny did either. We used mounting putty* to keep the pieces in place – mainly for marble, but also for the other characters when they were in hard-to-balance positions.

I read with Lily before Kindergarten every day, and so I borrow some inspiration from the books she chooses for Star Wars bedtime stories. Here are some recent ones.

The Grouchy Ladybug by Eric Carle. This turned into the Grouchy Little Ewok in the forest of Endor. He begins by being grouchy and belligerent towards another little Ewok and then a biggie wiggie Ewok, Storm trooper, and on up to Darth Vader and even the Emperor himself, threatening to fight each of them along the way. There is a happy ending along the same lines of Eric Carle’s original book.

The Pigeon Finds a Hot Dog! by Mo Willems. Yoda is wandering on Dagobah and finds a very yummy red berry and is about to eat it when a little baby Ewok finds him. Yoda doesn’t want to share it with the baby Ewok, but he does in the end and finds that there is more joy in sharing something special rather than keeping it to himself.

Lily can usually figure out which book I’m borrowing from pretty quickly, and she squeals with joy when she does. Some of the stories involve injecting Star Wars characters into their everyday life. For example, in one story I was walking the kids to school and then some threatening looking Storm troopers show up. Emma casts a spell on Anna that makes it so that whoever she kisses turns to a butterfly. Anna gives each Storm trooper a kiss, they turn into butterflies, and then they proceed to school without being late. Of course, I have to throw into all sorts of complications and embellishments to meet the kids’ minimum requirement of a ten minute story. If the story is too short, they require an additional story.

Looking for more fun ways to celebrate Star Wars on May 4th with your family? Check out these ideas!

May the fourth be with you! How do you celebrate Star Wars Day?

13 thoughts on “Star Wars Family Fun for May 4th”