A simple DIY cardboard play house that children can decorate themselves.

Emma and Johnny wanted a house to play with their little animals in, so I took a cardboard box, cut off the corners of the end flaps, and taped the longer flaps to the now-diagonal end flaps to create a house shape (with an opening in the roof, for easier access for play). Then we I cut a door and windows and they took it outside to paint. 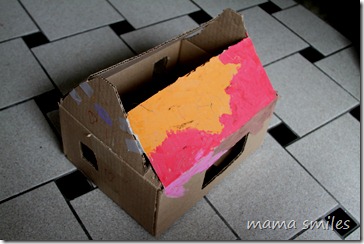 And here’s Johnny’s side, which is less bright primarily because Emma gave him the paints she watered down too much the other day. I would have made her share the non-watered-down paints, but these were the colors he wanted, anyway… I do like the way he used tape to make a partial windowpane:

It’s nothing fancy, but Emma and Johnny had a BLAST with this – and so did their friends who came to play Saturday morning! At one point they had sticks across the opening in the roof, and then pieces of grass they had picked – almost like a thatched roof!