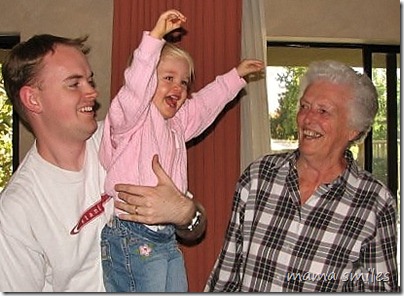 Mike with 1yo Emma and his Grandma

Mike’s Grandma passed away Friday morning (his dad’s mother, not his mom’s mother who just visited us). She had been fighting cancer for quite some time, so it wasn’t a big surprise, but saying goodbye to loved ones is never easy.

Mike’s Grandma was quite the lady. She raised seven children and moved all over the world – from Hawaii to Lebanon, Jordan, Malta, and California, before finally retiring near several of her children in Oregon. She was one of those women who could do anything and everything. When Mike and I moved to the UK for grad school, she wrote and asked if I was making Thanksgiving dinner. I replied that we had decided not to, because we had a miniscule oven and I didn’t want to deal with it. She responded with a story about a Thanksgiving dinner she cooked on a boat – by chopping the turkey in half and having a friend cook the other half on their boat! Some UK friends wound up cooking us a very British interpretation of Thanksgiving dinner that year, in a gesture of friendship I will never forget – and I will never forget Grandma’s boat Thanksgiving dinner, either!

I actually met Grandma when I went to her home for Thanksgiving dinner freshman year of college, and I enjoyed several subsequent Thanksgivings in her home. One year she secretly wrote to my sister asking for embarrassing childhood photos of me so she could pick one as my place card at the table. Grandma procured such an awkward photo that I couldn’t figure out which photo was mine at the table! Grandma would be proud of me this year – I made the Thanksgiving turkey, gravy, yams, mashed potatoes, green beans, and pumpkin pie all by myself!

I send out letters to my family every week, and Grandma wrote back to nearly every one. I will miss hearing from her, and I am sad that she didn’t get to meet Johnny or Lily. She wrote a wonderful life history, which she had bound and sent to each of her great-grandchildren. I’m excited to read it to them once they are a little older – it’s story of adventure, family, and a truly indomitable spirit.