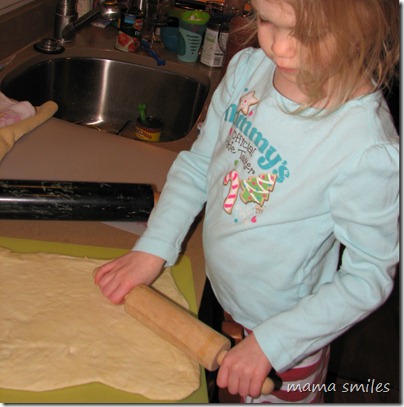 Wednesday night I got brave and let the kids help me make pizza from scratch while Lily napped. I even used a rolling pin – a goal for last year that I achieved only once. Our bread maker kindly mixed the dough (we used the pizza dough recipe from my favorite bread machine cookbook). Emma helped roll the dough flat while Johnny stole bits of dough to eat. I’ve learned that pizza dough rolls out much more easily if you flatten it and then let it sit that way for 10-20 minutes before rolling. 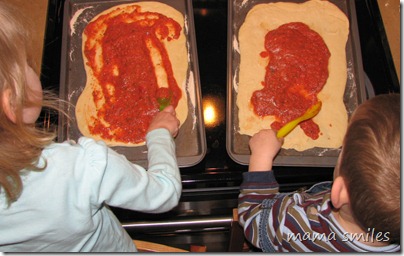 Both kids added sauce. I’m convinced that the secret to good pizza sauce is to puree fresh tomatoes instead of using canned ones. I actually like to pre-cook the crust a bit, but skipped it this time as dinner was already running late. I usually cook my pizza on parchment paper, but I skipped it because I wanted to try setting it on rice flour instead. I definitely prefer the parchment paper method, so we’ll go back to that next time. 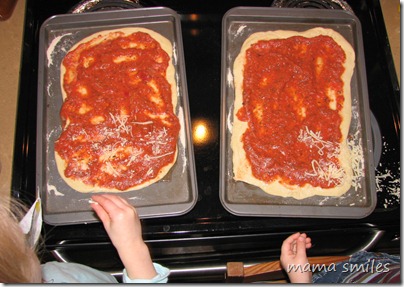 Next came the cheese. Emma was (predictably) much more attentive about seeing that the cheese made it onto the pizza.

I added the rest of the cheese, pineapple, and BBQ pulled pork for a dinner that was happily eaten by all – including Lily, who managed to nab somebody’s crust to gnaw at with the single tooth that made its appearance Tuesday evening after a day of clinginess.

189shares
189shares
Scroll to Top
This site uses cookies to collect data about site traffic and site interaction so that we can offer better site experiences and tools in the future.OkRead more