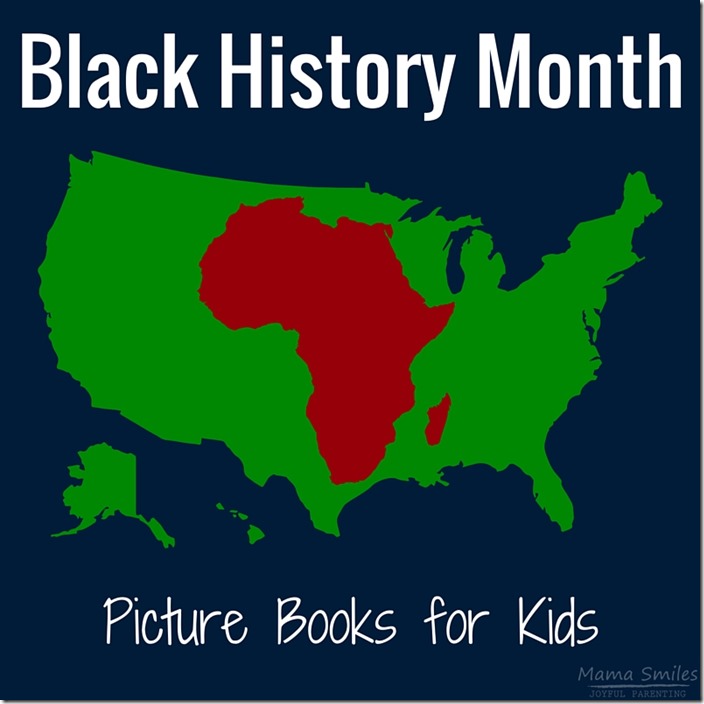 February is Black History Month, and today I am highlighting some wonderful picture books. I chose a mixture of biographical picture books and picture books about ordinary kids who happen to be black. Because our children are making a piece of history every day. A part of black history is seeing how children with an African heritage are just like children without African heritage. Another piece of black history is seeing how things are different for these same children, because of this heritage and its history in the United States.

I Have a Dream pairs words from Dr. Martin Luther King, Jr.’s transformational speech with beautiful illustrations. This book comes with an audio CD of the speech.

In Rosa’s Bus: The Ride to Civil Rights, I love how the repetition of the phrase
“That’s just the way things were.” is paired in this book with the
story of how one woman’s courage followed by a bus boycott CHANGED
the way things were to leave us with a better world.

Florence Mills was an incredibly talented performer who worked hard to provide opportunities for other African Americans. Harlem’s Little Blackbird tells her story.

Henry’s Freedom Box: A True Story from the Underground Railroad is an incredible true story that I had never heard before discovering this book.

Polio paralyzed five-year-old Wilma’s left leg, but she was determined to both walk AND run. Against the odds, she succeeded, going on to become the first American woman to earn three gold medals in a single Olympiad. Wilma Unlimited: How Wilma Rudolph Became the World’s Fastest Woman is her story.

Gordon Parks: How the Photographer Captured Black and White America tells the story of how Gordon Parks used photography to raise awareness of racism in the United States. Parks, named Gordon after the doctor who used ice water to shock him to life when he was born stillborn, was the youngest of fifteen children and went on to be the first black director in Hollywood.

Images of horrific hate crimes may come to mind first when I think of racism, but discrimination in America has infiltrated the most mundane aspects of everyday life. For example, in the 1950s and 60s, African Americans were banned from everyday factory tasks such as mixing bread in a factory. In These Hands a grandfather tells his grandson: “These hands were only allowed to sweep the floors and work the line and load the trucks. Because the bosses said white people would not want to eat bread touched by these hands.” Ultimately, the story is one of inspiration: “These hands joined other hands” and “Now any hands can touch the bread dough, no matter their color.”

Dad, Jackie, and Me captures the excitement of a boy and his deaf father who are huge fans of Jackie Robinson – the first black player in Major League Baseball.

Amazing Grace is the first in a series of picture books featuring this charming protagonist. True to the heroine’s name, issues around identity and race are handled gracefully in each book in the series. Grace is a little girl who knows who she is, and her resilience (helped along by a wonderful mother and grandmother)  is inspiring.

In Peter’s Chair, a little boy (Peter from The Snowy Day) struggles to adjust to all of the changes that come with a new baby in the house.

Lola at the Library: Little Lola loves the library. So do we!

In How Many Stars in the Sky?, a young boy struggles to sleep with his mother gone for the night. His father joins him on a star-gazing adventure. Any child will identify with missing a parent, and I love the father-son relationship in this book.

There are many, many other wonderful picture books that would be excellent reads during Black History Month. Do you have a favorite that we should be sure to read?