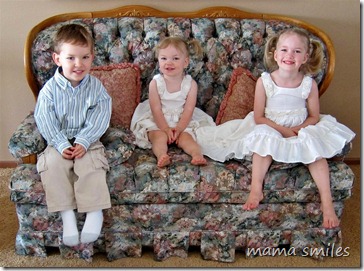 We have travelled a lot this past year, but this last trip was my most parenting-intensive attempt thus far. My brother B. AND sister E. flew out with us, E. flew back with us, and I had quite a bit of help from family while we were there. But the critical ingredient – Mike – was not there, meaning I was on my own for driving, bedtime, and other parenting dilemmas. Add in the emotionally-charged motivation for the trip (my grandfather’s funeral), and it was a big trip. Here’s how it went – at least, what I remember of how it went:

All in all, it was a good trip, especially considering the fact that it was a last-minute decision and plan! I didn’t forget to pack anything, I don’t think I left anything behind, the kids were as good as I could have possibly expected them to be, and we came home to a beautifully-kept house. Mike was actually out of town when we got home, but he had made us a welcome-home sign, stocked the fridge with fresh groceries, and left Hershey’s kisses on everyone’s pillows. I wish I had had the camera on hand to record the kids’ excitement when they discovered the chocolate!