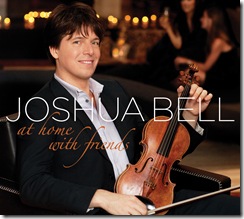 I’m very excited to review Joshua Bell’s newest CD, At Home With Friends, (provided by One2One), not least because it gives me an excuse to blog about this social experiment. Bell, one of the world’s most famous musicians, played for 43 minutes in Washington DC’s L’Enfant Plaza metro station on one of the world’s most famous Stradivarius violins, worth roughly $3.5 million. Only 7 of the 1,097 people who passed by stopped for even a minute to listen. Every single child who passed by tried to stop and listen, but each time their parents dragged them away.

Bell’s newest CD contains one of the most eclectic mixes of both music and musicians I’ve seen on a CD, as you can tell from the track list:

My favorite track on the CD, hands down, was “Eleanor Rigby” (performed with Frankie Moreno), so I was excited to see that you can watch a video of part of that performance as well as other tracks from the CD here. Lily was a particular fan of Nathan Gunn. I found the choice of John Dowland’s early music piece “Come Again” for Sting a little odd, but Sting has the admirable breath control required to sing this piece well, and it is entirely possible that his voice is more similar to the one Dowland (1563-1626) had in mind than the operatic performances frequently given today.

Bell’s intent with this CD was to replicate the casual musical get-togethers he hosts in his home. The CD is reminiscent of some musical evenings I attended and participated in (with far less famous attendees) as a music major undergraduate living in my university’s performing arts theme dorm. It’s a great way to introduce yourself to a range of talented musicians performing well-loved pieces, and it shows that classical music doesn’t have to be “stuffy”.