Skip to content
Home » Family » Goals and a Tutu
0 shares

At the beginning of this year I posted some goals for the year. I also wanted to set some small, easily-attainable goals for each month. For January, I decided to make a tutu for my daughter Emma’s third birthday next month. I had heard tutus are easy to make, but I’d never done it.

Here’s the finished tutu, made using this excellent tutorial from Vermillion Rules. 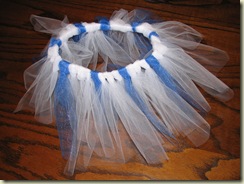 I didn’t actually follow the tutorial exactly since I wasn’t sure Emma would wear a super-full tutu (she doesn’t like layers as a general rule), but it was an excellent resource, answering every question I had from where to buy tulle to different types of tulle to use. I bought the kind that comes in 6” rolls, which requires less cutting.

As for my other goals, let’s see how I’m doing…

5 thoughts on “Goals and a Tutu”