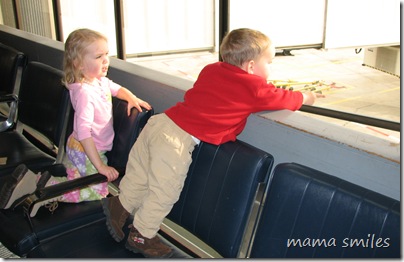 Our ride to the airport went smoothly. Mike didn’t see how we could haul three very young children, their gear, and their car seats through the entire airport, so we left Johnny and Emma’s car seats with our airport ride (my parents had car seats we could use). We brought Lily’s only because it makes a good carry-on luggage cart since it attaches to our stroller frame.

Getting through security was a small adventure. The security people were kind and understanding, as were fellow passengers. The gate wasn’t at all busy at any of our locations, but we still told at least eight fellow travelers to pass us before we had everyone’s shoes off and the stroller dismantled for the x-ray machine the first time. On the way back they opened a special security gate just for us, which I really appreciated! X-raying shoes proved particularly problematic. Johnny was very worried about his beloved fire truck shoes getting lost in the x-ray machine each time. Emma had a hard time understanding why we wanted her to wear her shoes in the airport AFTER telling her to take them off to get through security. Removing her shoes also put her in a general removal of clothing mood; on the way home she tried to talk us into allowing an entire wardrobe change in front of passport control.

Johnny, predictably, loved the airplanes. He would have admired them all day long. He sat nicely in his seat on the small plane taking us to DC – until takeoff. Then he got scared and wouldn’t stay in his seat. The lady sitting behind me remarked (very loudly) that people with young children should drive, not fly. Luckily I could hand him to Mike since he was still under two. He did the same thing during takeoff for the second flight. Thankfully he was calmer by the time we were flying home, since he turned two while we were in Vienna.

My mom picked us up at the airport. Mike and I both took a nap as soon as we got to the house. Emma and Johnny played with Grandma, whose house is a child’s wonderland. They had made two crafts and played with several different toys by the time we woke up. Emma and Johnny took afternoon naps, but early enough that they still got to bed by 11pm (5pm Boston time, so not too shabby). We went to bed by midnight, and ALL slept (with a few minor interruptions) until noon the next day. No naps for the kids on day two, but putting Emma to bed was a challenge. Lily had solo jetlag parties with me from 2-5am several nights while we were in Vienna. I think she rather enjoyed having me and the house to herself – she practiced rolling and scooting for several hours each night.

We flew on four different airlines: United to DC, Austrian Air from DC to Vienna, a new-to-me airline called Fly Niki from Vienna to Frankfurt, and Lufthansa from Frankfurt to Boston. All three European airlines outperformed United in terms of being family-friendly. Every airline except for United pre-boarded families with small children and gave each of the kids a small toy. The toys kept the kids engaged during takeoff, and helped them relax for the flight. Each European plane had changing tables in all of their bathrooms. I didn’t check the United flight, but I’ve had trouble on other US flights (included flights run by United) with having nowhere to change a diaper.

Fly Niki was our favorite flight. They offered us the use of a bassinet even though the flight was only one hour long, and they had baby food on hand for Lily (and then offered it to Emma and Johnny when they realized Lily was too young to be eating solid food). They even served us delicious, free(!) sandwiches. The toys they gave Emma and Johnny (little inflatable airplanes with a tail that could be decorated with the included colored pencils) came in small purple drawstring backpacks, much to the kids’ delight. They definitely embodied their “The passenger comes first!” motto on our flight, and I wish they flew in the US.

I was really impressed by the flight attendants on all of our flights. When we arrived in DC, the bulkhead seats (necessary for the free bassinet we had requested for Lily) for our flight to Vienna had somehow been assigned to someone without a baby. The Austrian Airlines gate attendant spent an hour moving people around to get us the bassinet seats, which helped Lily to sleep six of the nine hours on our flight to Vienna, allowing me to give Johnny some much-needed attention. Apart from Johnny’s takeoff fits on the way over, there was only one other point in our trip that was particularly difficult: the last two hours on the way home. The kids had been traveling for 16-18 hours at that point, so it wasn’t a big surprise that they were feeling cranky. We had also failed to get a bassinet on the ride home (another baby got there first). Said other baby screamed for nearly the entire flight, so I felt like his mother needed all the help she could get. Someone actually asked me at around hour 15 what my trick was; I said I had mellow kids and then thought the compliment was a tad ironic when all three children started screaming roughly one hour later. They calmed down in time for landing, and – with the exception of Lily – were happy on the ride home.

We’re making slow and steady progress on jetlag now that we’re home – all three kids were up from 1am the first night and 2am the second night. Last night (the third night home) Lily was the first up at 3. Johnny woke up around 4am but fell back asleep and slept until 6:45am! Emma woke up around 4am. I originally expected Johnny to give me the most trouble with jetlag because he loves his sleep routine, whereas Emma and Lily tend to go with the flow and don’t mind if we stay up later or get up earlier. I guess Johnny just loves sleeping while it’s dark out; he has adjusted the most quickly both directions.

Mike has been taking advantage of  jetlag to get to work even earlier, leaving between 5 and 6am. Yesterday the only other person at work when he got there was the security guard. Now to get him home earlier as well…

As much trouble as the trip was, and as much as I wish I could simply teleport to my parents’ home, I’m extremely grateful for the existence of (relatively) affordable flights. This was the first time Mike and I visited my parents since having children. While my parents have visited us several times and we have met up at stateside family reunions, it was especially nice to take our children to my parents’ home, where they could explore grandma and grandpa’s house and learn a little bit more about their day-to-day lives.

We didn’t see anyone else with more than two young children in any of the airports or on any of our flights.

12 thoughts on “Flying with three children under four”