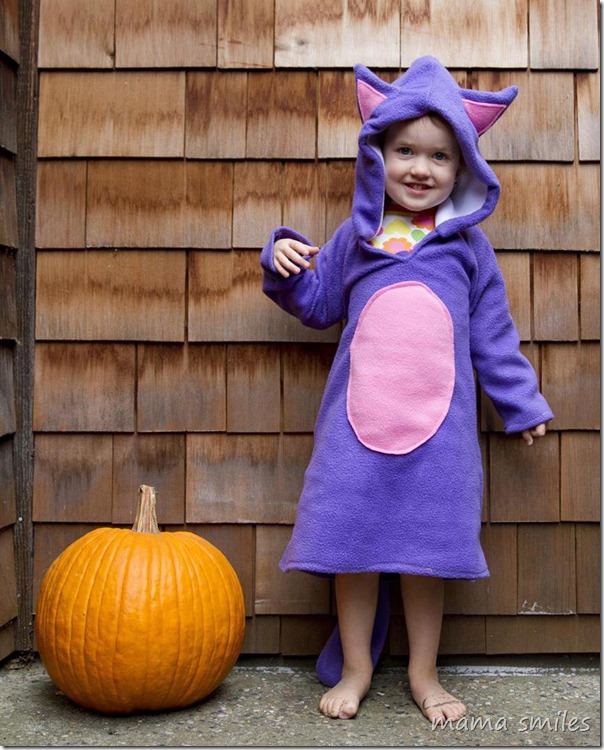 I am happy to say that I have three out of four costumes sewn, with the fourth cut out to (hopefully!) be stitched together today! All of my kids have sensory issues (although only one has a formal diagnosis), so these costumes were designed to be as comfortable as possible (see my sensory-friendly Halloween costumes for kids post for more tips). They are all made out of fleece from fabric.com (affiliate link), which is super-soft and silent. I used this robe dress pattern and tutorial written by the brilliant LiEr of ikatbag as the basis for all three costumes. This is the second time I have used this pattern to make costumes for my kids – back in 2012 I used it as the basis of Emma’s Little Red Riding Hood costume – which still gets played with even though Emma has (much to her dismay) outgrown it.

Anna requested a purple cat with a pink tummy and pink ears for her costume. She also wanted her costume to be a dress. I sized down LiEr’s robe for Anna’s costume and added ears, a round pink tummy, and a purple tail. Anna loves humor, so I made sure that this cat was full of whimsy. 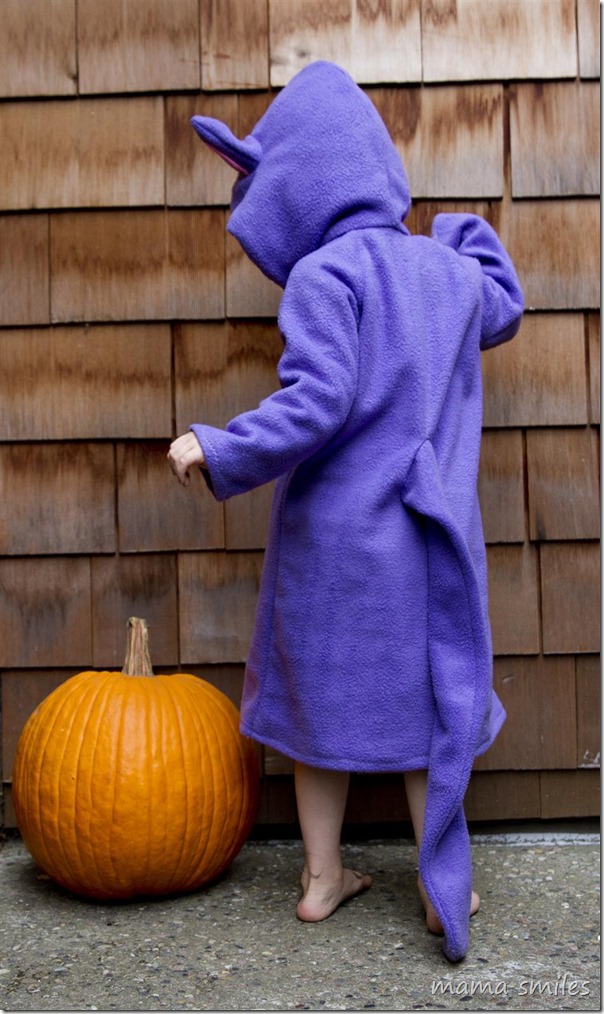 Anna’s cat tail barely touches the ground when she is standing still. It does not touch the ground when she is moving, which is important because this means she will not trip on it. I didn’t stuff the tail because that would make it feel bulky. The costume as it is is so comfortable that she is wearing it instead of her jacket when we go out (very fortunate since it is finally getting very slightly cold here in California for a couple of hours in the morning and she has decided that she does not like her jacket). She has also worn it just to play every single day since I made it. Success! 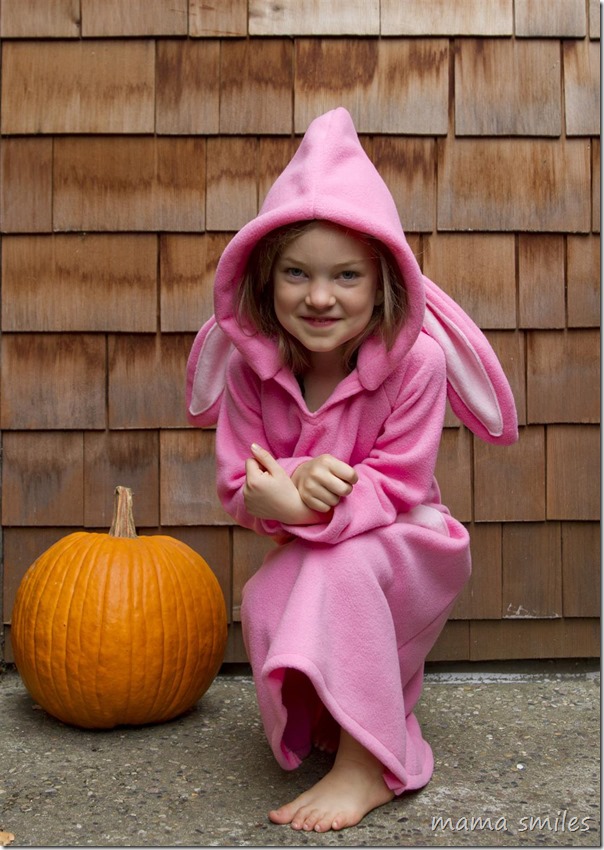 Six-year-old Lily wanted a bunny costume that would be pink and pink with a white tail. I followed LiEr’s pattern for the robe, then added a pink belly and ears. Setting the ears low on the hood keeps this costume from looking like an Easter bunny costume. 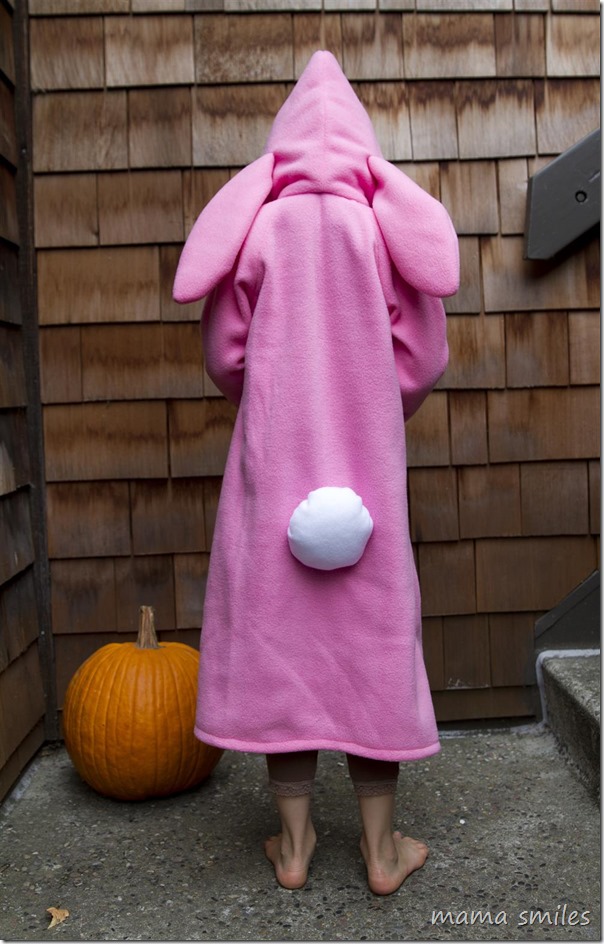 For the tail, I cut out a ten-inch circle of white fleece, basted around the edge, pulled the edges tight, stuffed it, and then pulled the edges very tight and hand stitched it to the back of her outfit.

As with Anna’s cat, Lily’s bunny outfit has been a big success! She and Anna wear their costumes and play together every day. 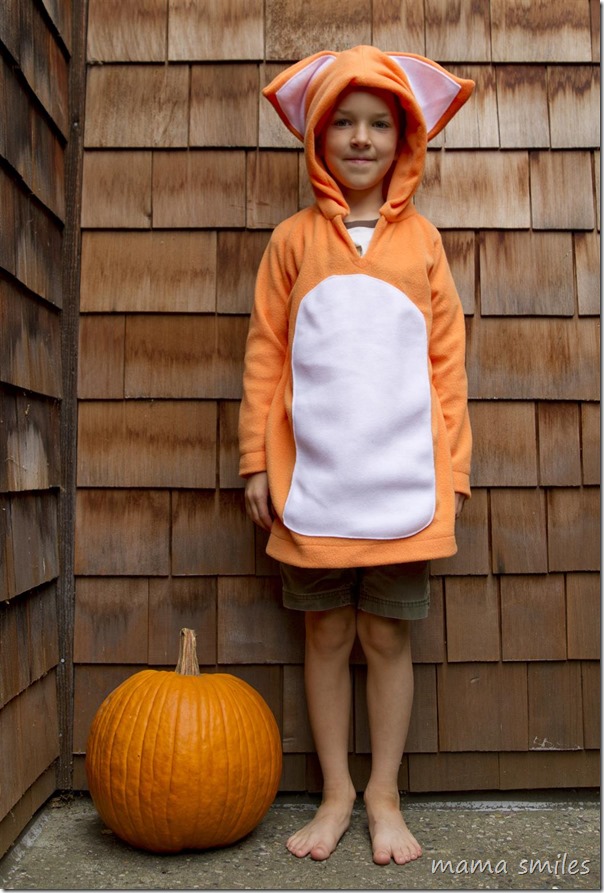 Seven-year-old Johnny wanted to be a fox. I used the same pattern, but widened it out and cut the central piece as more of a rectangle than a trapezoid. Foxes have large white bellies; hence the large white stomach shape.

The ears look perfectly fox-like when the hood is down, but slightly Yoda-ish or cat-like when the hood is up. I think if I were to redo this hood I would fold the ears in half (as I did with Lily’s bunny ears) and place them even closer to the top of the hood. Johnny is far too conscientious to complain, but I have a feeling he would like them better that way also. 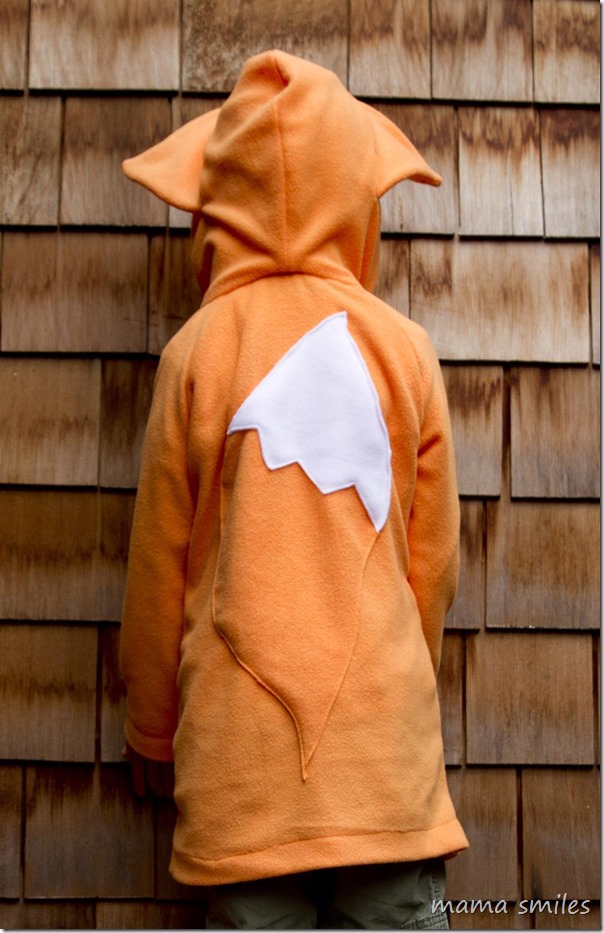 My son isn’t the type to want a tail dragging along behind his costume, so I stitched it on as an applique instead. I think it works quite well!

I considered making pants to go with this, outfit, but when I looked at pictures of foxes, they all have brown, black, or grey legs. So Johnny will wear a pair of regular pants with his sweatshirt top – or shorts if our ridiculously warm weather holds.

You can find more of our DIY costumes here. What are your kids dressing up as this year? Are you making any costumes?