Today’s post comes from Becky Morales, who is the lucky mom of 4 multicultural and bilingual kids and an educator. She founded KidWorldCitizen.org, where parents and teachers can help kids learn about the world, and become compassionate, global citizens. I especially love Becky’s posts on Geo-Literacy, 3D Salt Dough Maps, and the “My Place in the World” Project she made with her kids.

Ethiopia is very dear to our hearts because my son, Ricky, was born there. We have tried to learn as much as we can about the country, so the Ricky can have a connection to his heritage. He loves to teach other kids about his birthplace!

When you look at a map of Africa, Ethiopia is very easy to locate. On the east side of the continent, you’ll find the "Horn of Africa," and Ricky thinks it’s called this because it looks like a rhino’s horn. Ethiopia is located here, though it does not have any coastline. It is surrounded by the countries of Eritrea, Djibouti, Somalia, Kenya, South Sudan, and Sudan. 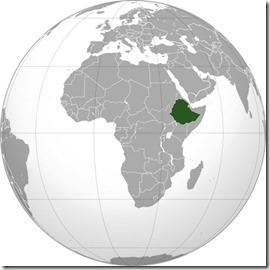 Ethiopia is very mountainous, and several types of unique (endemic) animals are found in the mountains: Gelada Baboon, the Walia Ibex and the Ethiopian Wolf. There are many types of monkeys and birds, and also in certain areas there are endangered black rhinos, cheetahs, gazelles, zebras, lions, and even a few elephants.  Besides the mountains, the country is divided by the Great Rift Valley, where there are many lakes. In these lakes, in the south of Ethiopia, you will find hippos and crocodiles. 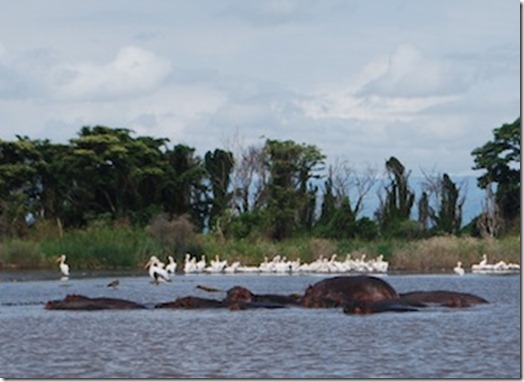 The current Ethiopian flag has 3 horizontal stripes: red symbolizes strength, yellow is for peace and hope for all of the many ethnicities and religions in Ethiopia, and green stands for the land. You will notice similar colors in other African flags; Ethiopia is admired by the Pan-African movement and newly-independent countries in Africa because it was not colonized by any European nation during the colonial era, except for a brief occupation by the Italians. 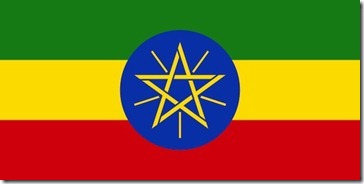 More than half of all Ethiopians are either Orthodox Christian or Protestant, and a third are Muslim. Religion is a very important part of Ethiopian culture, and yet there is no fighting between the religious groups. Christianity arrived in the 1st century, and Islam in the 600’s. Many tourists visit northern Ethiopia to see the amazing churches carved out of rock in the 12th century, such as Lalibela. Here is a picture of the historical Lalibela church, and the largest Orthodox Church in Africa: Bole Medhane Alem Church in Addis Ababa. 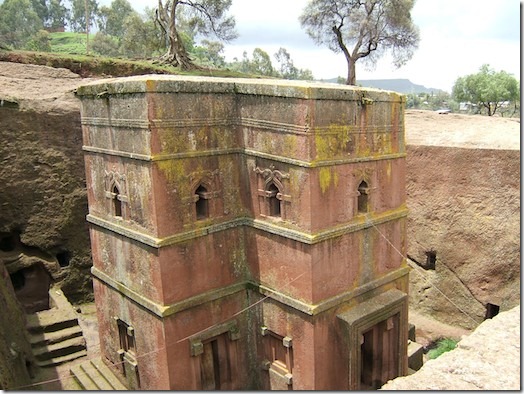 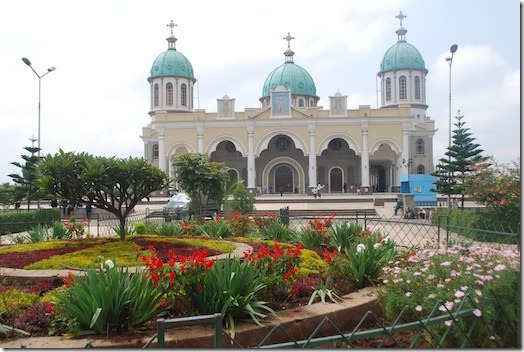 The capital of Ethiopia is Addis Ababa, and has over 3 million people. There is a bustling downtown with many monuments and shopping areas. Addis is the home to many museums, the National Palace (of the president), numerous cathedrals and churches, and a great university. While there are many supermarkets and malls, Addis also has the "Mercato:" the largest open air market in Africa. 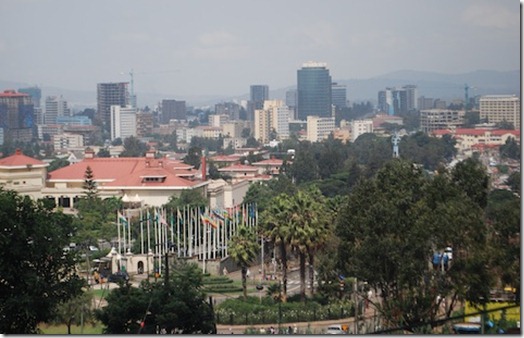 Traveling outside of the city, agriculture is the main source of income. Livestock roam the fields, and while driving on the highway you are likely to encounter herds of cows, skittish goats, and slow-moving donkeys. Farmers use traditional methods for harvesting and planting, and sell some of their produce and grains in local markets, while saving the rest for their families. Homes in the countryside might be made of mud blocks, or different types of straw and grass structures. 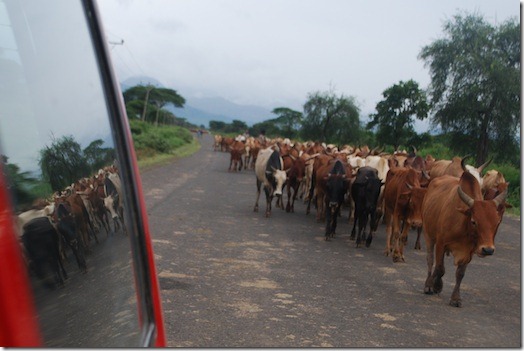 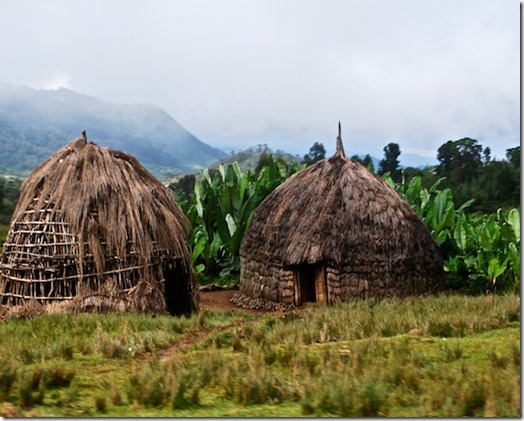 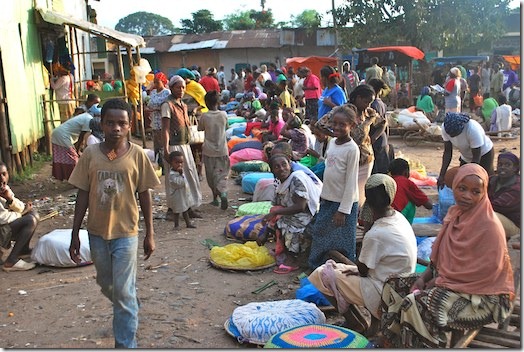 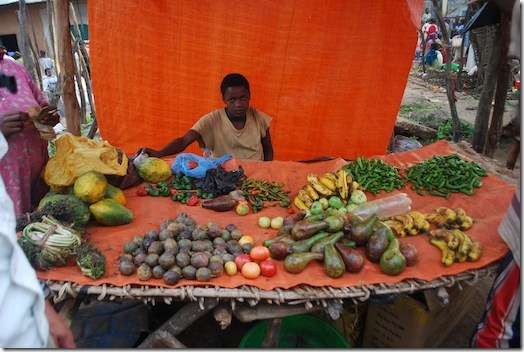 There are many different tribes of people throughout Ethiopia, who hold onto their own customs, language, and dress. While many people have left their traditional lifestyles in order to move to bigger cities, the government is trying to encourage young people to maintain the cultural traditions and languages of their ancestors. With increased transportation and tourism, some anthropologists say that many of the tribal cultures are endangered.

The most typical food from Ethiopia is a type of bread called "injera," made from the grain "teff." Teff is a super-grain, high in calcium, protein, iron, and fiber that grows in Ethiopia. It is mixed with water, left to ferment (like sourdough) and made into a large, thin, spongey "pancake." People pile on different stews of vegetables, lentils, meats, and sauces and then use their fingers to tear off a bit of the injera to scoop up the delicious meals on top. 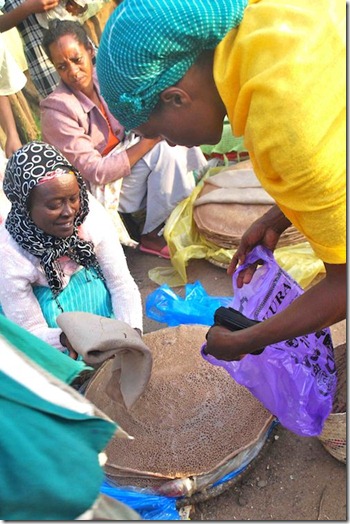 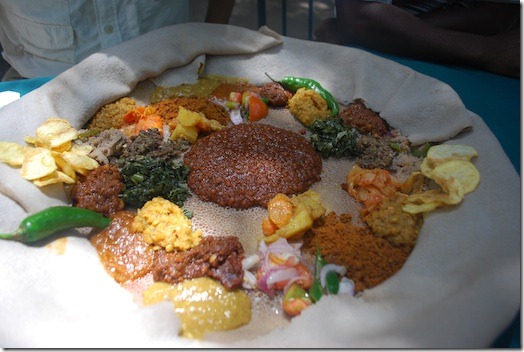 The most famous drink from Ethiopia is coffee, which was said to be discovered in Ethiopia when a shepherd wondered why his goats were extra-hyper and wouldn’t sleep after eating a particular berry (the coffee bean!). There are many versions of the story, yet what the truth may be Ethiopia has delicious coffee! The coffee ceremony is an integral part of Ethiopians’ lives, and is a part of all holidays, visits from friends, in restaurants… or just for fun. 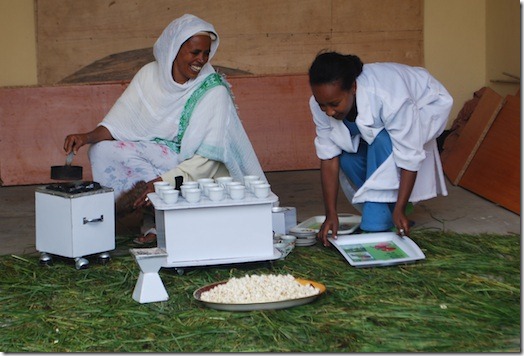 Little kids love to drink fresh fruit juices, or cow’s or goat’s milk. Here’s a layered drink with mango and avocado juice you can make at home by just pureeing the fruits in a blender one at a time with a tad of sugar and lime juice:

Here are some wonderful children’s books to read to learn more about Ethiopian culture:

E Is for Ethiopia, whose text and photographs for are done by Ashenafi Gudeta, Ataklti Mulu, Betelhem Abate, Dama Borum, 4 young photographers in Ethiopia whose work is supported by the UK aid agency “Catholic Agency for Overseas Development” (CAFOD). Their vibrant and colorful photos were taken around the country of daily life, and celebrates the rich culture and beautiful people of Ethiopia.

Ethiopian Voices: Tsion’s Life, by Stacy Bellward. This book provides readers with a window into the life of a young girl named Tsion (SEE-yon), who lives in Addis Ababa, Ethiopia. Using an Amharic word on each page, simple descriptions and detailed photographs, she shares her daily life and activities.

I also recommend any books by Jane Kurtz, the daughter of missionaries who spent decades in Ethiopia where they raised their five daughters and one son in a remote village. She has written several books about Ethiopia and Eritrea such as Fire on the Mountain, Pulling the Lion’s Tail,Trouble, and Only a Pigeon.

I hope you’ve enjoyed this little journey through Ethiopia! It is a fascinating country with an ancient history and warm people who love little kids. Maybe one day you’ll be able to visit?

Thank you, Becky, for this incredible post! I hope I do get to visit Ethiopia, someday. What a fascinating country!