I lived in La Paz, Bolivia with my family from the summer of 1992 to the summer of 1994. We arrived when I was 12, and left the day after my 14th birthday. The 9,840-13,450 ft elevation of this city (depending where you are; our home was a little over 12,000 ft above sea level) makes for very few trees and bleak mountains that reminded my family of photographs of the moon.

My mother brought a bunch of Sculpey Polymer Clay with us, and my 7-8-year-old sister R and I spent hours trying to capture images of the local Aymara and Quechua people, who we greatly admired. I found these pieces at my grandma’s house in Utah last week, and thought it would be fun to share them here. They are quite tiny – that’s my grandmother’s carpet they are sitting on!

This scene, created by R, depicts a couple watching over their alpacas on the Altiplano, just outside of La Paz. Bolivia is home to llamas as well, but we preferred the gentler (and smaller) alpacas. I always wanted to see a protected vicugna, but never did.

We bought our fresh produce at a local open-air market, and I believe R made this scene to depict the stand of the woman we always bought large quantities of oranges from. A family of 10 can consume a lot of oranges in a week! 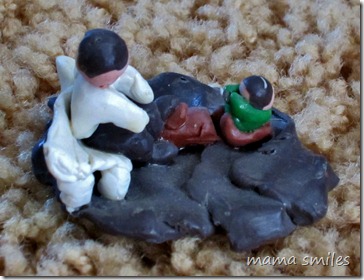 Bolivia was and remains one of the poorest countries in the world, and – when I lived there, at least – children were expected to help support their families. This scene, also by R, depicts a small boy shining a man’s shoes. Even water is scarce in La Paz, and it was not unusual to have several children show up at our house in a day, carrying gallon jugs and asking if we could give them water. Of course we always did, and we tried to have toys and clothing on hand to offer as well. Some of those children were about Lily’s size – older, probably, but no taller. 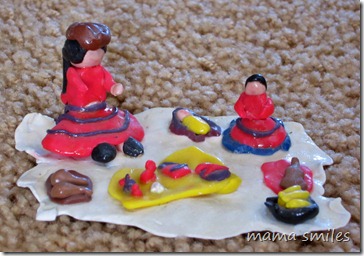 I made this scene to depict my favorite stall at our local market – the one selling handmade wares. I added in a violin (on the right), and two charangos face down on the left, although I don’t recall ever seeing musical instruments there. My father had brought home a hand-made Bolivian violin, and I had learned to play charango in school (same chords as for guitar, but more strings). I’m pretty sure the yellow things above the violins are bananas, although I don’t remember eating bananas in Bolivia. Maybe wishful thinking? 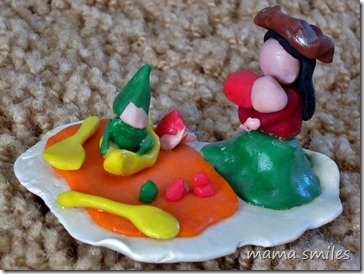 This last scene is a lady and her children selling tourist wares, probably based on something I saw near Lake Titicaca or Tiahuanacu. One child is sitting in a replica of the reed boats that are still used today on Lake Titicaca (interestingly enough, similar to those depicted in Egyptian hieroglyphs). The child is wearing a typical Bolivian knit hat. All of the women are wearing our attempts at Bowler hats, as is traditional.

Exploring Geography is a weekly feature showcasing cities, states, and countries in a child-friendly manner. Please email mamasmilesblog at gmail dot com if you are interested in contributing a guest post.