I was really excited to go on a business trip to Berlin last week, though I missed MaryAnne and the kids terribly. I knew that the kids would be doing a lot of fun activities while I was gone, like usual, and it was fun to read MaryAnne’s blog posts while I was gone. When I got to my hotel, I found this bear standing on his head. 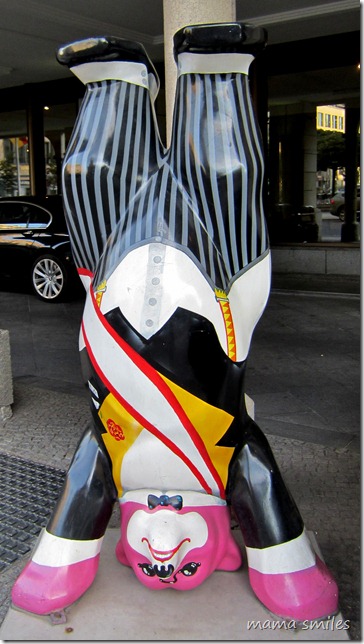 I had to take a picture of him for Lily because she really loves bears and everything that is pink. I believe this bear is part of the Buddy Bears series that started in Berlin. There are bears all over the city, especially in gift shops.

I visited the Brandenburg Gate, one of the most famous landmarks in Europe. The Gate was closed after the Berlin Wall was built in 1961, and it remained that way until 1989. It has served as a symbol of freedom and the desire to unify the formerly divided city of Berlin. I also visited Checkpoint Charlie, the most famous former checkpoint along the Berlin wall, but I didn’t get any pictures. 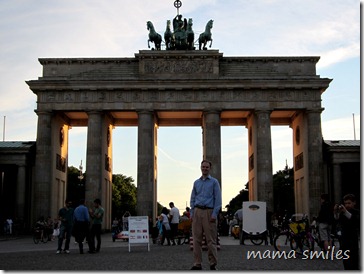 I also visited the Reichstag building, opened in 1894 to house the parliament of the German Empire. It caught fire in 1933 and was further damaged during the Battle of Berlin in 1945. It has since been reconstructed and now holds the modern parliament. 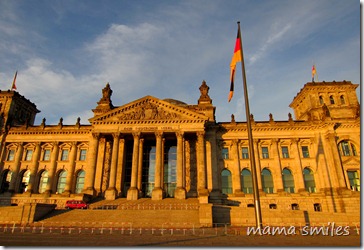 The Holocaust Memorial is a very short walk from the Brandenburg Gate and the Reichstag building. This, very unusual, memorial consists of 2,711 concrete slabs. Underneath is a visitor information center. 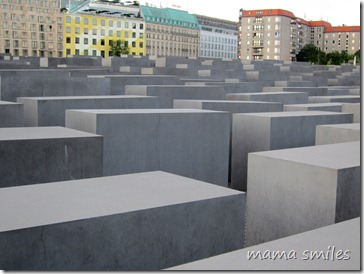 I had a great time in Berlin, and I enjoyed learning more about this fantastic city that I read about in history books growing up. I was sure to bring back plenty of treats for MaryAnne and the kids so that they could learn about German chocolate.

Mike is my wonderful-in-every-way husband. He makes me and the kids laugh, and is kind enough to tolerate our chaos =)

Exploring Geography is a weekly feature showcasing cities, states, and countries in a child-friendly manner. Email mamasmilesblog at gmail dot com if you are interested in contributing.