A few weeks ago, one of my sisters sent out a detailed account of her day. It was fascinating, and I suggested that we all pick a day and track everything we did – for that one day. We all talk on the phone and get together when we can, but this was a fun way of connecting family in a new way – and we all got added insight into one another’s days! The quotes below are from my parents, siblings, and in-laws (actually, one of those quotes is from Mike), detailing their day. 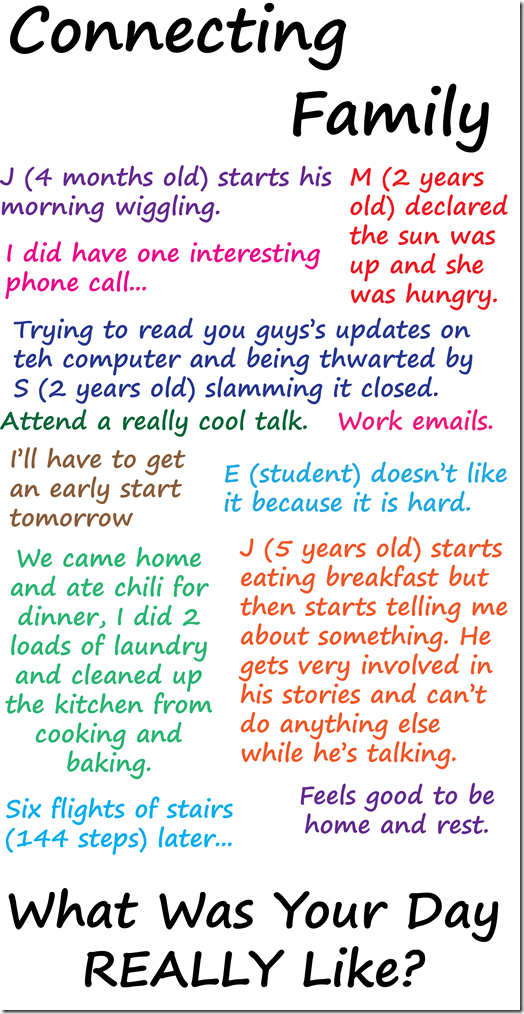 Have you ever tried something like this? I highly recommend it! We had fun reading one another’s updates during the day! And here, if you are curious, is my day – it was school vacation week:

5:30am Mike and Emma get up. I hear Mike in the shower. Mike has Emma wake Johnny up – he has an upper endoscopy today (forgot that when I picked today, so much for a “typical” day…) Anna is awake and nursing; Lily is asleep. I grab my phone to see what time it is and start deleting emails I can get away without reading. I’ll theoretically read the rest later (along with the 600 sitting in my two email inboxes…)

6am: Mike and Emma eat breakfast. Johnny can’t since he’s going under general anesthesia. Luckily he is too sleepy to care.

6:30 Mike and Johnny leave for Lexington. I get up, and Anna and Lily sense my absence and wake up 5 minutes later. At least they are both cheerful! I get Lily dressed for the day, and change Anna’s diaper. Emma comes in, and I cajole her into bringing in the bin with Anna’s toys.

7am Lily and Anna are playing on my bed (Emma is also in there, reading). I type up to here. I check my blog stats and they are kind of low, so I add two old posts to Pinterest.

8am: I take a shower, changed Anna’s diaper, started a load of laundry, get Anna down for her morning nap – an hour early, but she woke up about an hour earlier than usual.

8:37 Anna wakes up from her nap. I show her her reflection in the mirror and watch the grin spread across her face. I love how much she loves seeing herself in the mirror. Lily wants to play with Anna. Anna likes the idea in theory, but Lily can be slightly overwhelming, so we’ll see how long it lasts. 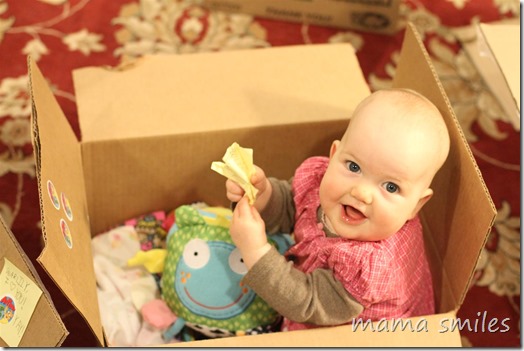 8:56 I’m mid-breakfast. Anna is playing in a box, which turns out to have been a somewhat genius idea. She doesn’t fall over this way (she is pretty good at sitting, but not perfect), her toys don’t get too far away, and the box provides a Lily defense shield (safety from Lily’s sometimes aggressive “affection”).

10:33 I change Anna’s diaper, and start another load of laundry. I clean the hard water gunk off of our humidifiers, refill them, and move them from the kids’ rooms into the dining room and kitchen. Johnny gets home from his upper endoscopy, and Mike is off at work (he was in the house for under two minutes). Their tests all look fine, and we should get definitive results within a couple weeks. I set Johnny up watching Pingu (one of his two promised rewards – the other is a small Lego set which we’ll visit a store to pick up this weekend). I talk to Sarah for a while on the phone. Anna is playing with her reflection in the mirror again and I see a second tooth there – I was right, that’s what kept her (and me) up last night! Anna is tired, so I put her down for her second nap. She has *just* fallen asleep when Johnny comes into the room in tears. Pingu is over. Mike told him he could play Angry Birds, but Mike is at work and I think maybe he took his tablet with him. Devastation from a little boy who still doesn’t feel very good from anesthesia. Anna is wide awake. I try (for the third time since he got home) to get Johnny interested in food, and succeed this time. Johnny spends a couple minutes cuddling her while I make him breakfast. Lily comes out and wants breakfast, too, so I make her the same thing as Johnny (shredded wheat with frozen blueberries). Johnny wants to know why Lily always wants whatever he wants, and I tell him because she loves him. I had offered Lily food earlier in the day, but she wasn’t interested, having helped herself to an apparently large number of goldfish while I was in the shower. I pull the laundry out of the dryer and write this down while the kids are playing. Emma is reading a book – she’s been reading all morning, barring one moment of upset over some already-forgotten injustice (involving the junk mail of the day, I believe) and a few minutes playing with Anna and Lily.

10:44 I’m arguing with Johnny. He noticed Anna has two layers of tops on, and wants to take one off. I always try to keep two layers on  my babies. He drops it, but two minutes later I look over (while typing this) to see him standing on Anna’s high chair tray (she is sitting in her high chair. I tell him to get down and he jumps off. The anesthesia was supposed to make him woozy, but I would say hyper is more the side effect I’m seeing.

11:12 I eat leftover salmon. Anna wants some, so I pull out her pureed baby food. She eats a few spoonfuls. She doesn’t really eat proper meals yet; just tastes. Johnny comes asking me for “some of that white stuff what you gave me yesterday.” I ask him if it’s food and he doesn’t answer, but says he can show me. He brings me to the tic tac container. I see why he didn’t answer when I asked him if it was food. I gave my three “big” kids two yesterday, and the girls got two today while he was gone. He saw Lily’s (she saves nearly all her candy) and that’s how he knew to ask. I give him two. He and Lily go off to play. Emma is on book number 3 of the day.

12:06 I get Anna down for her second nap – successfully, this time. All three kids were playing a fun pretend game, but when I come out an argument starts over a piece of Metal from a broken basket that Lily got her hands on. I throw it away because it is sharp, but Lily is not happy. She calms down after a few minutes. Johnny asks for a picture of a germ, so I show him several. He picks a highly magnified germ image, and we print out copies of it for him and Lily. They carry their pictures around the house saying, “eww.” Emma is very disappointed when I can’t get the picture she wants (of a much prettier monarch butterfly) to print. She pulls out her coloring pages and starts to color. I offer her lunch (she ate breakfast with Mike at 6am and must be hungry) but she doesn’t like the choices. Johnny and Lily aren’t hungry after their late breakfast. Johnny is drawing a guy brushing the germs off of his teeth – I guess that’s why he wanted the germ picture. Lily is playing with Melissa & Doug stickers. Anna is still asleep. 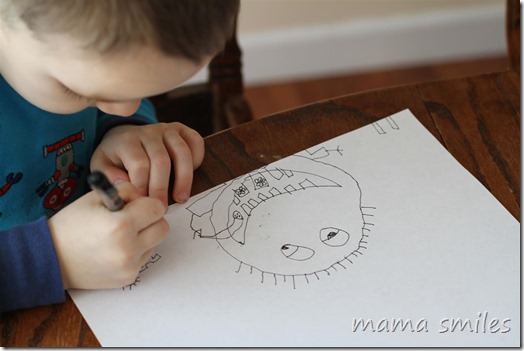 1pm: The kids are eating yogurt squeezers (yogurt in plastic tubes), and Emma reads me the jokes from the Stonyfield wrappers. I’m catching up on email, writing my long overdue family email, and downloading photos from my phone (also a long overdue thing). I read C, S, E, and J’s accounts of their days – very interesting and fun! Hoping that Anna stays asleep a little longer so I can get this done. Johnny and Lily get it into their heads to “check on” Anna – which, of course, wakes her up.

2:22pm: got my family email sent off after all sorts of interruptions, including a discussion with Emma about the trials and tribulations of life as the oldest child. She feels much better after venting. I spend some quality time with Anna – more mirror playing, and other baby goofiness. Emma, Johnny, and Lily are busy planning out their future lives. All three plan to be stay at home parents, and to name their future children after their favorite current classmates.

3:50pm: The kids found the tablet, and I had them clean up the living room in exchange for the promised Angry Birds game. They play that and then I let them play Felt Board for a while (love that Android app). I play with Anna, feed her, change her diaper, then play with her some more. I put Anna back in her cardboard box, and all the other kids need boxes too. So I find two more boxes (note to self: save the next box so I have one per kid) and they enjoy decorating them and playing in their boxes. 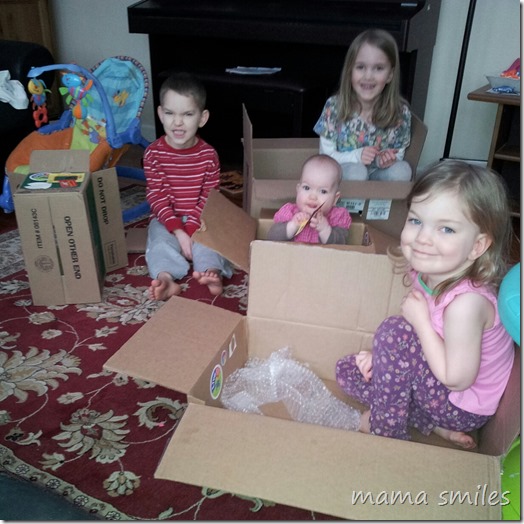 5:25pm made dinner (Anna supervised from the ERGO carrier, as she does most days. It was a hit with the kids (spaghetti with turkey and tomato sauce, including fresh basil – what a treat!). Anna is ready for her nap now.

6:13pm Mike gets home.I get Anna down for her evening nap. I spent the past not-quite-hour paying our sewer bill and generally updating our finances. Working now on a study I’m being paid for, while Mike eats dinner. The kids decide to have some post-dinner snacks, too – yogurt and raisins.

8:37pm The kitchen is cleaned up, and the kids are in bed asleep, except for Anna who gleefully is playing in her cardboard box. I made ice cream cones for Mike and I for a mini date. He’s doing work on his laptop now. I’ll hopefully get a blog post written before I go to bed.

10pm: Going to bed. Spent more time talking to Mike and played with Anna. Blog post did not get written. Maybe tomorrow :)

32 thoughts on “Connecting Family: What Was Your Day REALLY Like?”