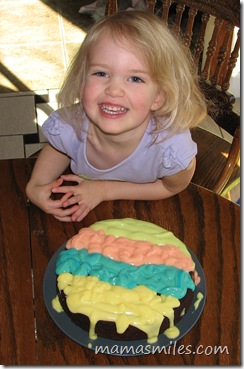 Mike’s been gone all week (he gets back tonight). Emma is a HUGE Daddy’s Girl, and to get her out of mourning mode I suggested that we bake and decorate a cake. I originally intended to make and decorate a cake similar to her last birthday cake, which Emma also helped me make (incidentally also while Mike was out of town) and talks about all the time. We baked the same cake, but the thought of decorating it with all that stickiness on a Monday morning all over the counters AND Johnny (now old enough to be much too helpful) was a bit much, so we came up with this equally fun and tasty but much less work-intensive and messy alternative.

One of the yellowish shades was meant to be green, but we didn’t put much food coloring in it at the beginning and then Emma decided she quite liked the resulting very pale shade of green.

We cut a small triangle off of one bottom corner of each bag so that Emma could help me pipe the pudding onto the cake as frosting. The end result was both pretty (see top photo) and tasty:

This was actually the first time my children have each finished a slice of cake AND asked for seconds. Usually they have a bewildering lack of interest in cake.

This was a fun activity that we will definitely be repeating. If you do it, be sure to keep any leftovers in the fridge since pudding is meant to be refrigerated.

If you homeschool, there are plenty of ways to turn this into an activity within a unit on measurements, color mixing, fluid mechanics, textures, aesthetics, chemistry, nutrition…

15 thoughts on “Cake Decorating for Kids”