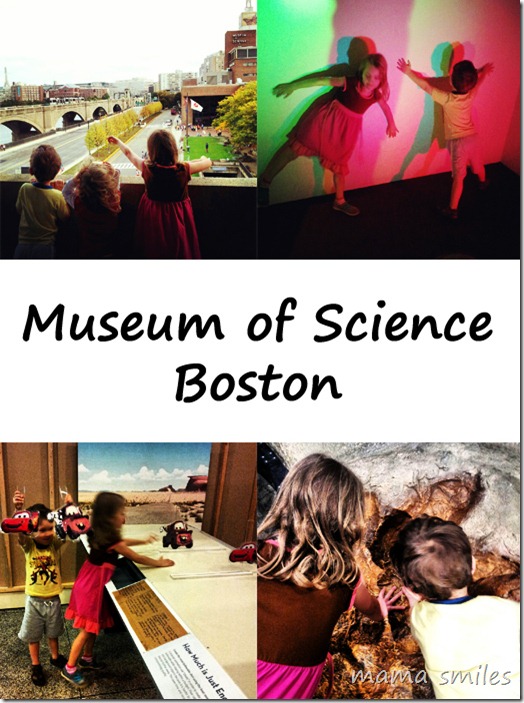 Mike and I took all four kids to the Boston Museum of Science on Saturday, and they had a BLAST! The museum was pretty busy since it was a Saturday, but the kids had plenty of space to explore. Emma (six years old) and Johnny (four years old) dove into every exhibit! Johnny was particularly enthralled – he asked several times while we were still at the museum when we could come again! Johnny declared the Cars animation exhibit pictured above to be his favorite; Emma liked the dinosaurs best. Lily (three years old) was slightly overwhelmed by the size of it and all the people, but she enjoyed herself once we borrowed one of the museum’s free strollers for her to sit in. Anna hung out with me and Mike in her ERGO carrier. I think that next time we’ll bring our own stroller – the museum is very stroller-friendly, although you can expect a wait at times for the single elevator.

While the pictures are from some of the exhibits that are more targeted to younger kids, I was surprised at how much my kids enjoyed exhibits that were clearly way over their heads, including the nanotechnology exhibit. They didn’t always understand what they were seeing, but I think that giving children the opportunity to see exhibits, even if they can’t grasp the concept, is key to nurturing an interest in science as they learn and grow.

We finished off the day watching the Spontaneous Fantasia show in the planetarium. Artist J-Walt has combined improvised animation with music, and shown on the vast screen of the planetarium it is quite amazing. The show lasted 70 minutes, and the kids sat, mesmerized. They are still talking about the performance. Anna did find it a bit over stimulating, but babies are hardly the target audience. Ideally, I would have had her asleep before the show started…

You can get an idea of what we saw in this video:

Performing in the Planetarium Dome from J-Walt on Vimeo.

J-Walt has since converted his performance rig into an Anitar (animation guitar), which the kids found especially fascinating!

Have you been to the Boston Museum of Science? Do you have a favorite exhibit there? Do your kids enjoy science museums?

Many thanks to the Boston Museum of Science for providing tickets to this event and entry into their exhibit halls for this outing!

18 thoughts on “Boston With Kids: Museum of Science”