Celebrate Women’s History Month as we learn about Asian Pacific American female athletes who are changing the game today from author Mia Wenjen.

Thank you for having me at Mama Smiles, MaryAnne! Since March is Women’s History Month, I wanted to share a few of the athletes that didn’t make it into my Kickstarter book, CHANGING THE GAME: ASIAN PACIFIC AMERICAN FEMALE ATHLETES.

The first is Eileen Gu, the first Chinese American to win a gold medal at the X Games. I found her on social media through We Are Resonate. At just 17-years-old, she is the youngest competitor in Women’s Ski SuperPipe at #XGames Aspen 2021!

Eileen is originally from San Franciso and speaks fluent Mandarin. Look for her at the Beijing 2022 Winter Olympics where she is considered a serious contender for Freestyle Skiing Gold.

In addition to skiing, she’s also a fashion model and can be found walking runways in Paris and New York. She will be attending Stanford University in the fall.

My neighbor Donna R. told me about two girls who went to our elementary school! They must have been different years from my two daughters because I didn’t know them. They moved to Deer Valley to train year-round.

Isabel (Izzy) and Zoe Atkin are half Malaysian-British freestyle skiers. Izzy Atkin won the bronze medal in Slopestyle Skiing in the Korea Winter Olympics. Izzy and her younger sister Zoe are currently training to make the Beijing Winter Olympics 2022. They both ski for the British Olympic team.

Georgette W, an alumna from my business school, told me about Peanut Louis. She said that Peanut was a role model growing up. I didn’t know about Maureen “Peanut” Louis Harper, a top-ranked junior tennis player and professional tennis player on the WTA tour. Peanut and her husband are now giving back to the community with the Harper for Kids foundation.

Valarie B. asked if I included her kids’ favorite Asian American athlete, Michelle Kwan. I didn’t because Kristi Yamaguchi is featured in my book and I didn’t want to have two in the same sport. I felt that Asian Americans are over-represented in figure skating.

So… Which Asian Pacific American Femal Athletes Got Featured in the Book?

Changing the Game: Asian Pacific American Female Athletes profiles 18 women in a variety of sports. They also represent a range of ethnicities.

My Kickstarter campaign runs through March 11, 2021. What Asian Pacific American female athlete did I leave out? Thanks for sharing!

Are there other athletes out there changing the game who should have been featured in this post or the book? Please share in the comments! 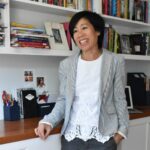 Website
Mia's books include the picture book Sumo Joe (a Bank Street College Best Children’s Book of the Year), Asian Pacific American Heroes, Best #OwnVoices Children’s Books: My Favorite Diversity Books for Kids Aged 1-12 (a compendium of book reviews to find diversity books), How To Coach Girls (winner of IBPA Benjamin Franklin Silver Award™), and The Elusive Full Ride Scholarship: An Insider’s Guide.
She lives in Boston with her husband, three kids, and Golden Retriever. Mia can be found online @PragmaticMom on Twitter, Instagram, Pinterest, and Facebook, and as Mia Wenjen on LinkedIn and YouTube.
23 shares